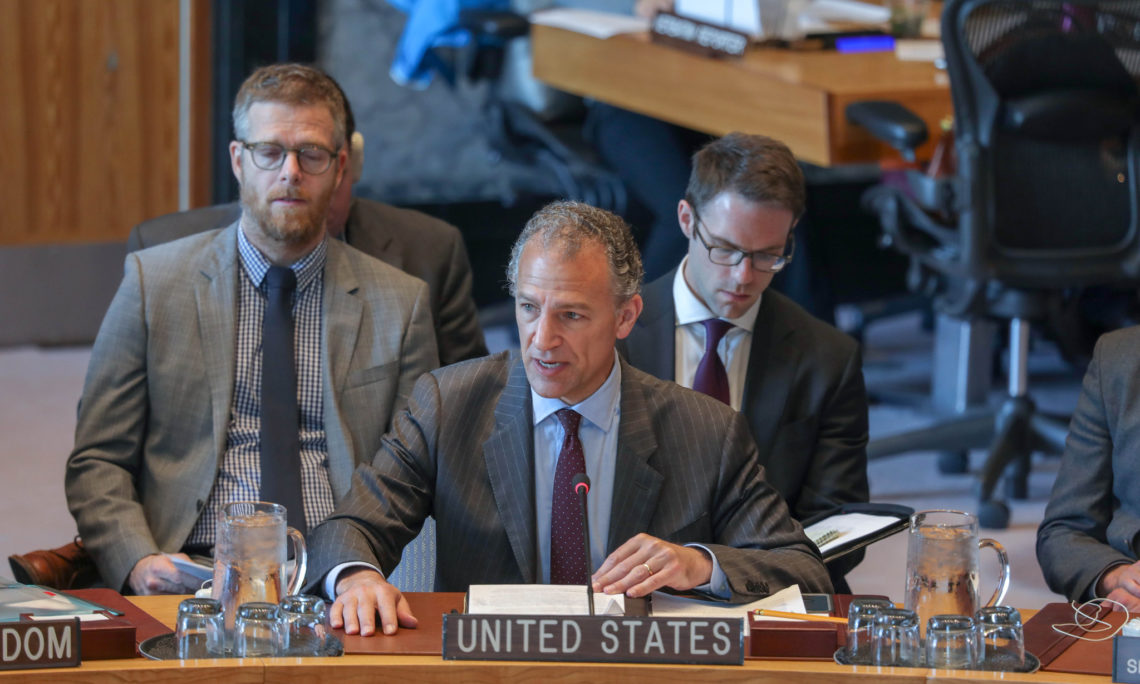 Thank you, Mr. President, and thank you, Assistant Secretary-General Mueller, for your important briefing today.

Mr. President, the Assad regime, with the help of its military allies in the air and on the ground, has carried out a punishing campaign against the Syrian people over the last eight years.  The regime’s attacks have led to one of the greatest humanitarian crisis since World War II sending millions of people fleeing chemical weapons attacks, air strikes, heavy artillery shelling, arbitrary arrests, and starvation.

During some of the most deadly moments of the conflict, the Assad regime gave people of eastern Aleppo, eastern Ghouta, Madaya, Moadamiya, and Homs, a bleak choice — surrender to regime forces or starve.  This siege tactic is an unmistakable part of the Assad strategy to seek a military solution to the conflict rather than negotiate a political solution through the UN’s good offices.  Unfortunately, for millions of people inside Syria, Assad’s use of starvation as a tactic continues.

There’s no clearer example of the regime’s starve and surrender strategy than in Rukban.  Humanitarian conditions are deplorable as the result of the regime’s refusal to allow the UN to deliver aid on a regular basis to the thousands of people living there.  Many of these people came to Rukban to escape the regime’s attacks on civilians in their home villages and towns.

In addition to denying UN aid convoys’ access to Rukban, the Assad regime, with military support from Russia, has imposed a blockade around the camp that is also preventing regular commercial deliveries of much-needed supplies.

Mr. President, the people of Rukban have few options to survive.  We know this from the messages we hear from the residents themselves.  They don’t have enough food; children are dying of malnutrition; medicines, medical facilities, and healthcare providers in the encampment are scarce.  Since April 22, the Assad regime has denied requests from the United Nations for a third humanitarian assistance convoy — the regime could easily approve the convoy tomorrow.  The United States stands ready to facilitate any deliveries.  We know the UN and Syrian Arab Red Crescent can provide the necessary assistance since they’ve done so twice before.

Today the United States renews its calls on the Assad regime to approve a third convoy to Rukban immediately.  The United States is deeply concerned that the regime’s continued refusal to allow aid into Rukban has forced people to leave the camp under threat of starvation.  Creating humanitarian conditions so dire that families are forced to choose between remaining relatively safe inside the camp or feeding their starving children is not a humane choice to force upon innocent civilians nor an acceptable way to generate departures from the camp.

I expect that those defending the regime will cite the fight against terrorists as a blanket justification for these severe measures.  The Council is united on the need to fight terrorism, but that’s not a license to starve civilians nor to depopulate a civilian safe haven.

Any return process should be carried out with full UN visibility and access to ensure that departures from the camp are safe, dignified, voluntary, and informed.  Coercing people to depart the area by not allowing food in cannot be described as anything other than starving people into submission in order to further a false narrative that the war is over, or that it’s safe to return home.  For many, this could not be further from the truth.

Mr. President, the UN has reported to the Security Council that the recent military escalation in Idlib and northern Hama by the regime and Russian forces has caused additional displacement and reduced the ability of the UN and its partners to provide humanitarian aid.  The United States, once again, underscores that the full implementation of the September 2018 Sochi Agreement is essential to protect civilian lives and prevent further forced displacement.  Russia and the regime must re-commit to implement the 2018 Sochi ceasefire and restore a full de-escalation of fighting in Idlib immediately.  Moreover, the parties on the ground must ensure UN cross-border humanitarian aid deliveries authorized by resolution 2449 reach populations in Idlib, including the de-militarized zone.

Mr. President, the United States remains alarmed by continued air strikes against health care facilities and health workers in northwest Syria.  Attacks directed against protected medical facilities are prohibited by international law and are in defiance of many Security Council resolutions, including 2165, 2268, and 2449.  There must be accountability for the forces and leaders who planned and conducted any such strikes.

Finally, Mr. President, the United States remains gravely concerned about the impact that any further use of chemical weapons, including chlorine gas, would have on the humanitarian situation in northwest Syria where conditions are increasingly dire.  The United States and our allies are closely watching the situation in northwest Syria and will respond quickly and appropriately to any further use of chemical weapons by the Assad regime.

As the Security Council marks the 20th anniversary of adding protection of civilians in armed conflict to its agenda, the conflict in Syria is one of the starkest examples of the failure to protect civilians.  We have to do more to ensure full implementation of international humanitarian law that this body has called for again and again.  The people of Syria are depending on it.

I thank you for your attention.