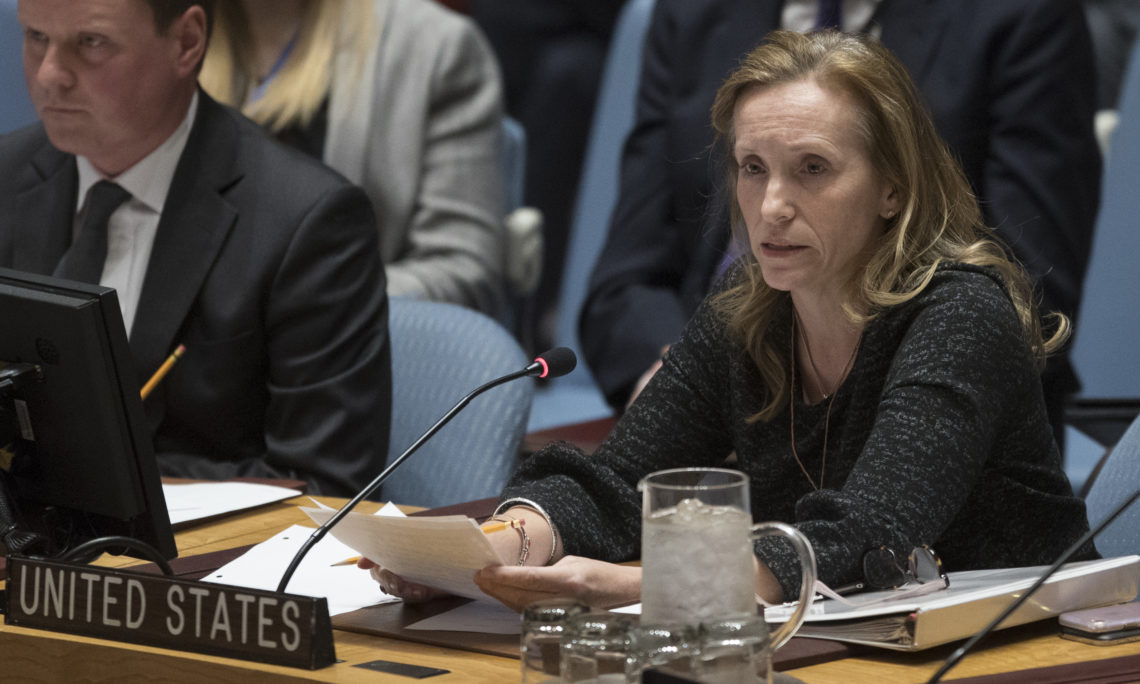 American Ambassador on the Economic and Social Council of the United Nations Kelley E. Currie speaks during a Security Council meeting on the situation in Syria, Thursday, Feb. 22, 2018 at United Nations headquarters. (AP Photo/Mary Altaffer)

Every time this Council attempts to address the humanitarian crisis in Syria, we take a small leap of faith. I say “we” in reference to the Security Council. And I speak of “faith” because all Council members – and most UN Member States – still genuinely try to uphold the responsibilities enshrined in the UN Charter, including abiding by and fully implementing UN Security Council resolutions.

Despite the grim updates we heard today, we have to maintain our hope that we can help the Syrian people. Because if we don’t have that hope, then we are wasting our time here.

Just four days ago, the Security Council took another leap of faith. We passed Resolution 2401, demanding a 30-day ceasefire for all of Syria, unimpeded and sustained humanitarian access to deliver desperately needed food and medical supplies, and immediate and unconditional medical evacuations based on need and emergency.

Our goal was clear and simple. The Assad regime and their supporters have been pummeling eastern Ghouta, where 400,000 people live under siege and constant bombardment. Resolution 2401 demanded this assault stop. That was this Council speaking with one clear voice.

The opposition groups operating in eastern Ghouta have made clear their commitment to the ceasefire. In letters to this Council, the Free Syrian Army, Jaish Al-Islam, the Al-Rahman Legion, and Ahrar Al-Sham all committed to implement Resolution 2401.

But once again, that hope has been crushed. Because so far, for the people of eastern Ghouta, nothing has changed.

Despite the unanimous call for a ceasefire, the regime’s attacks continue unabated. Hundreds of Syrians have been killed or injured since we passed the resolution on Saturday.

It gets worse. Less than 24-hours after we demanded the ceasefire, there were reports that the Assad regime once again used chlorine gas as a weapon. Such attacks demonstrate Syria’s complete and utter contempt for this Council – and the United Nations.

On Monday, one human rights organization reported 18 attacks that defied this Council’s demands. On Tuesday, another organization reported at least 23 airstrikes and four barrel bombs in eastern Ghouta. Syrians on the ground are reporting that Tuesday was worse than Monday when it comes to strikes from the regime. How can that be?

On the humanitarian front, the Assad regime has allowed no deliveries of assistance into eastern Ghouta, as Mark Lowcock said. Not one. The opposition groups in the area have expressed their commitment to allowing aid in, but, of course, the Assad regime is still saying no.

Since we adopted Resolution 2401, Russia has announced a daily, 5-hour, “humanitarian pause” in the aerial bombing of civilians in eastern Ghouta. This is cynical, callous, and in flagrant defiance of the demands of 2401. The cessation of hostilities is for at least 30 days – every day, all day. Russia does not get to unilaterally re-write the terms of the resolution they negotiated and they sat here and voted for.

Russia, Iran, and the Assad regime are not even trying to hide their intentions. They are asking civilians to leave eastern Ghouta on the false premise that they can then attack anyone left in the area as much as they would like. Let’s call these actions what they are. Assad and his allies want the civilians of eastern Ghouta to walk into the arms of a regime that has been attacking them and starving them for the last seven years. This is not a humanitarian gesture. They don’t care if the 400,000 people of eastern Ghouta suffer, as long as they can continue pursuing their military and political objectives.

We know what Iran, Syria, and the Assad regime are doing because they have done exactly the same thing before. This is the same playbook they used for Aleppo in 2016. Once again, we, including Russia, demanded in this Security Council chamber that Assad stop the bombing, and yet Russia, Iran, and Assad continue their attacks, defying the wishes of this Council and the international community.

Because we’ve been through this before, we know what Russia will say today. They will say that there are terrorists in eastern Ghouta, so the Assad regime can bomb as ferociously and indiscriminately as it wants and kill as many civilians as it wants. That defies the principles enshrined in the laws of war.

The Assad regime should not get to bomb and starve its own people into submission under the guise of counterterrorism. This Russian argument makes a mockery of this Council and international law.

When the ceasefire was adopted unanimously last Saturday, including by the Russians, Ambassador Haley said “our resolve to stand by our demands in this resolution will be tested.” So it has come to pass. Despite everything that has happened since Saturday, we are not casting aside the ceasefire in Syria. Just the opposite – we want to redouble our efforts as a Security Council to implement it.

But the only way to change the situation on the ground is for all of us – every single one of us around this table and each Member State of this United Nations – to speak the truth about what is happening. These past four days should show us that when it comes to demanding a ceasefire, it’s not enough to say “all parties” should show restraint or “all parties” must commit to the ceasefire. Because in eastern Ghouta, there is only one party dropping barrel bombs. There is only one party gassing the Syrian people. There is only one party that is denying deliveries of food and medical assistance. It is the Assad regime, with the full support of Russia and Iran.

On Saturday, we said that the only way to restore the credibility of this Council is to make the ceasefire a reality. Russia, Iran, and the Assad regime have not complied with this Council’s demand, and they have not silenced their guns. Unless we take action, they will stop at nothing to destroy eastern Ghouta, and we will yet again fail to help the Syrian people.