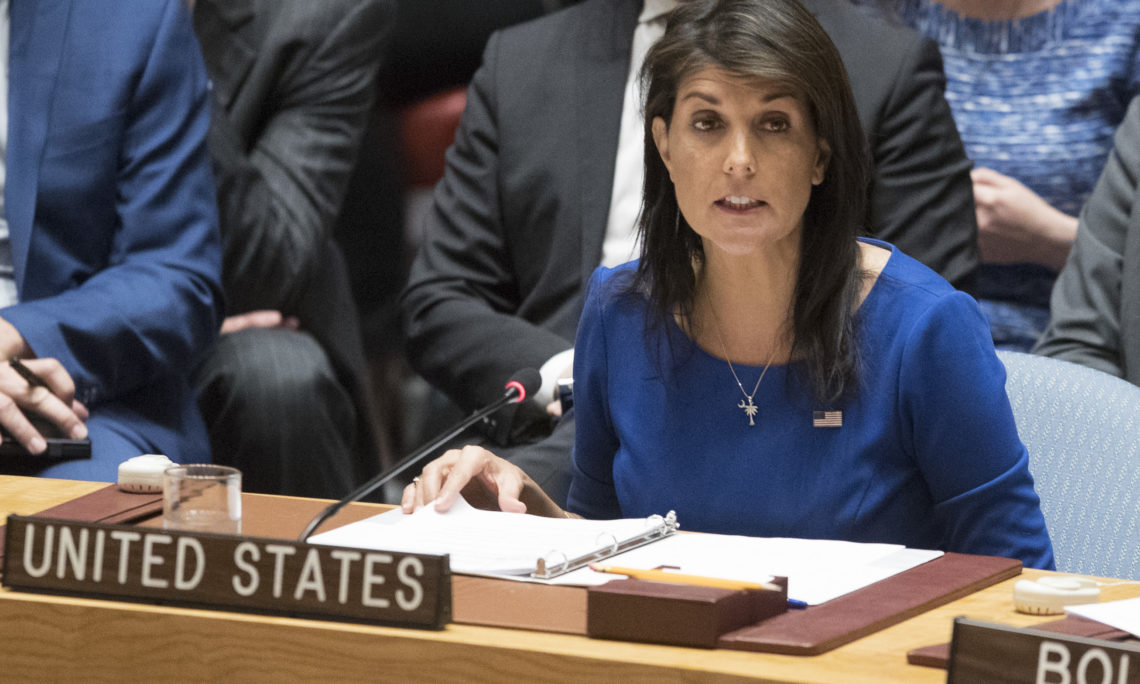 Thank you, Mr. President, and thank you, Mr. Secretary-General, for your briefing today. This is our fifth Security Council meeting in the past week to address the situation in Syria. A week has gone by in which we have talked. We’ve talked about the victims in Douma. We’ve talked about the Assad regime and its patrons, Russia and Iran. We’ve spent a week talking about the unique horror of chemical weapons. The time for talk ended last night.

We’re here today because three permanent members of the United Nations Security Council acted. The United Kingdom, France, and the United States acted – not as revenge, not as punishment, not as a symbolic show of force. We acted to deter the future use of chemical weapons by holding the Syrian regime responsible for its atrocities against humanity.

We can all see that a Russian disinformation campaign is in full force this morning. But Russia’s desperate attempts at deflection cannot change the facts. A large body of information indicates that the Syrian regime used chemical weapons in Douma on April 7. There is clear information demonstrating Assad’s culpability.

The targets we selected were at the heart of the Syrian regime’s illegal chemical weapons program. The strikes were carefully planned to minimize civilian casualties. The responses were justified, legitimate, and proportionate. The United States and its allies did everything we could to use the tools of diplomacy to get rid of Assad’s arsenal of chemical weapons.

Syria committed to abide by the Chemical Weapons Convention, meaning it could no longer have chemical weapons on its soil.

President Putin said Russia would guarantee that Syria complied. We hoped that this diplomacy would succeed in putting an end to the horror of chemical attacks in Syria. But as we see from the past year, that did not happen.

While Russia was busy protecting the regime, Assad took notice. The regime knew it could act with impunity, and it did.

In November, Russia used its veto to kill the Joint Investigative Mechanism, the main tool we had to figure out who used chemical weapons in Syria. Just as Russia was using its veto, the Assad regime used sarin, leading to dozens of injuries and deaths.

Russia’s veto was the green light for the Assad regime to use these most barbaric weapons against the Syrian people, in complete violation of international law. The United States and our allies were not going to let that stand. Chemical weapons are a threat to us all. They are a unique threat, a type of weapon so evil that the international community agreed they must be banned.

Our Syrian strategy has not changed. However, the Syrian regime has forced us to take action based on their repeated use of chemical weapons. Since the April 2017 chemical attack at Khan Sheikhoun, the United States has imposed hundreds of sanctions on individuals and entities involved in chemical weapons use in Syria and North Korea. We have designated entities in Asia, the Middle East, and Africa that have facilitated chemical weapons proliferation. We have revoked the visas of Russian intelligence officers in response to the chemical attack in Salisbury. We will continue to seek out and call out anyone who uses – and anyone who aids in the use – of chemical weapons.

With yesterday’s military action, our message was crystal clear. The United States of America will not allow the Assad regime to continue to use chemical weapons. Last night, we obliterated the major research facility that it used to assemble weapons of mass murder. I spoke to the President this morning and he said if the Syrian regime uses this poison gas again, the United States is locked and loaded. When our President draws a red line, our President enforces the red line.

The United States is deeply grateful to the United Kingdom and France for its part in the coalition to defend the prohibition of chemical weapons. We worked in lock step, we were in complete agreement. Last night, our great friends and indispensable allies shouldered a burden that benefits all of us. The civilized world owes them its thanks. In the weeks and months to come, the Security Council should take time to reflect on its role in defending the international rule of law.

The Security Council has failed in its duty to hold those who use chemical weapons to account. That failure is largely due to Russian obstruction. We call on Russia to take a hard look at the company it keeps, and live up to its responsibilities as a Permanent Member of the Council and defend the actual principles the United Nations was meant to promote.

We are prepared to sustain this pressure, if the Syrian regime is foolish enough to test our will.