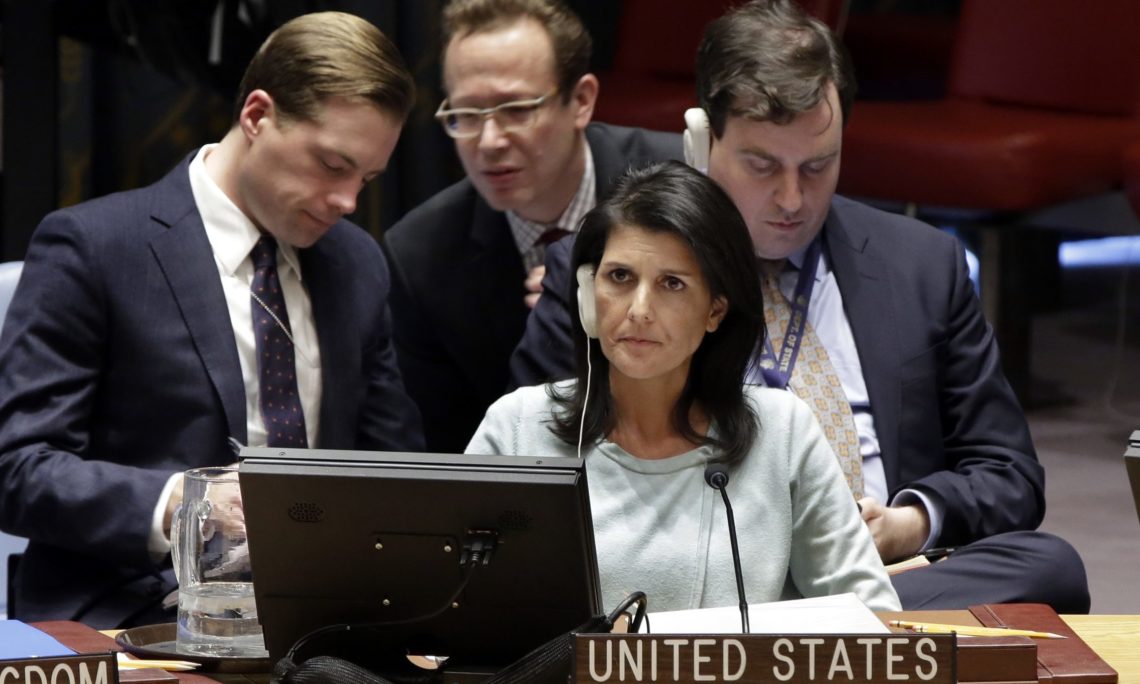 The new U.S. Ambassador to the U.N. Nikki Haley, and members of the delegation, listen during a Security Council meeting of the United Nations, Thursday, Feb. 2, 2017. (AP Photo/Richard Drew)

Thank you, Mr. President, and thank you, Secretary-General Guterres, for your remarks and for sharing your strategy to strengthen the UN’s counterterrorism efforts.

The United States is determined to do whatever it takes to defeat the threats posed by radical terrorist organizations and to cut off state sponsorship of terror. There is no higher priority.

Terrorist acts directed or inspired by ISIS, Al-Qaida, and other such organizations are unequivocally a threat to international peace and security – a threat that should inspire each of us to act decisively. All Member States should commit themselves to building a stronger response to terrorism.

The reason for a new approach is clear. ISIS and groups like it are finding new ways to thrive in the world’s ungoverned spaces and to launch attacks across borders. Terrorist organizations have developed resilient networks to recruit, radicalize, and bankroll their killing. The United States will not tolerate terrorism or the infrastructure that supports it.

No country is immune to the threat. From Paris to Brussels, from Baghdad to Nigeria, and from Boston to Orlando, the path of destruction has reached worldwide proportions. All of us must act now to prevent these attacks.

Because terrorism is a transnational threat, the United States is hopeful that the United Nations can play a valuable role in helping Member States counter it. But to do that, the UN will need to adapt. The UN was designed to maintain international peace and security by facilitating the peaceful resolution of conflicts between states. Whether the UN is effective in addressing the challenges posed by non-state actors and supporting counterterrorism is a test of this institution’s ability to meet the international security challenges of today.

But there is room for the UN to do more. It can expand the assistance it provides to Member States. It can help states stop the flow of foreign terrorist fighters. It can work with states to build more robust systems to check who is coming across a border.

The UN can also contribute to stopping terrorist recruitment by amplifying anti-violent extremist voices in its programs, and by partnering with civil society organizations that speak out against violent extremism.

And the UN’s work to promote respect for human rights, including freedom of expression, and the rule of law remains essential to preventing radicalization to violence.

But let’s be clear: Defeating the world’s most dangerous terrorist organizations cannot fully succeed until UN Member States stop their own support of terrorist activity. Proposals on paper will have limited impact as long as there are states that choose to arm, shelter, and finance terrorist organizations. It is vital that the international community, and this world body, state that with clarity, and act upon it. The United States will not hesitate to stand against the forces of terrorism, and that includes standing against the states that sponsor it, in particular the Islamic Republic of Iran.

So I commend the Secretary-General for his reform proposals, and for the seriousness with which he considers this issue. We have much work to do to rid the world of the threat of terrorism.