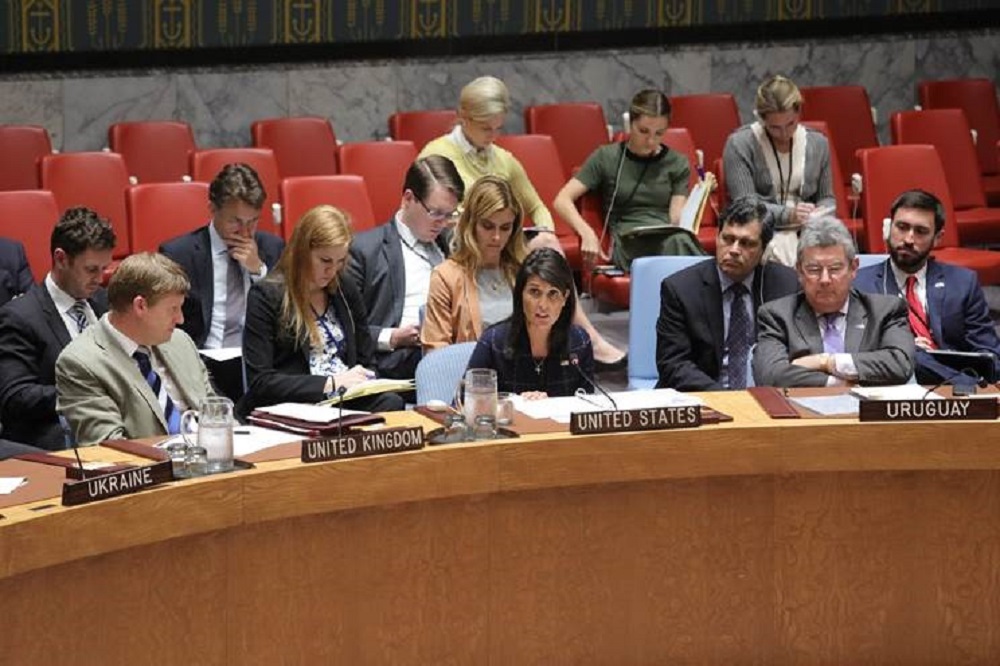 Thank you, Mr. President. Thank you Staffan and Mark for your briefing.

Mark, let me take a moment to welcome you and welcome you to the Security Council. Your dedication to addressing the humanitarian crisis in Syria is inspiring. I would be grateful if at some point you could tell us if the Syrian regime has issued you a visa yet.

Last week’s high level-meeting to address the humanitarian need in Syria was very productive. We thank the EU for convening it to focus attention on the ongoing crisis stemming from the Syrian conflict. The United States was able to announce $697 million in new humanitarian assistance for victims and to host communities that support Syrian refugees. Other nations also made much-needed commitments.

Although there has been some lessening of the violence in Syria, this is no time to become complacent. If the Syrian people don’t see a political process working in parallel with our de-escalation efforts, the violence will resume. Any gains against ISIS will only be temporary. Any agreements on paper in Astana will not succeed.

The Syrian people will remain vulnerable and at odds with each other without a political process in which they and the regime can participate in good faith. And yet the Syrian regime refuses to come to the table in good faith.

Instead, the regime continues to deny humanitarian access to those in need. Monthly UN operation plans, including this month’s, have been met with “constraints.” No cross-line convoys have been able to move in recent weeks despite having received approval from the Syrian government at the outset.

And, as the Commission of Inquiry has reported, Syrian armed forces continue to use chemical weapons against civilians and target hospitals and medical personnel.

Just last week there were reports of airstrikes in the Idlib and northern Hama provinces. The strikes killed at least three medical personnel and damaged a number of medical facilities and civil defense centers.

Just yesterday there were reports of an alleged regime attack on a center for the disabled in Mdira. This attack, if true, is reprehensible. These attacks fit an all-too-familiar pattern in which medical facilities and personnel – and the civilians they serve – are victims of strikes by the Syrian regime and its Russian allies.

The United States is committed to finding a solution in Syria. We must increase humanitarian access to besieged and suffering communities. We must hold the regime accountable for denying the assistance.

But the only lasting solution in Syria – the only way to end the violence and defeat terrorism – is through a political transition, one that does not allow Iranian influence to replace ISIS or Assad in power. If the civil war continues, more people will suffer. And our gains against ISIS will only open the door to other extremists seeking to exploit the conflict.

All of those who have answered the call of human tragedy in Syria have our thanks and our respect.

But we must not – and we will not – forget what is needed to truly solve this crisis: A real political process through which the Syrian people gain the ability to ensure their own safety and determine their own future.