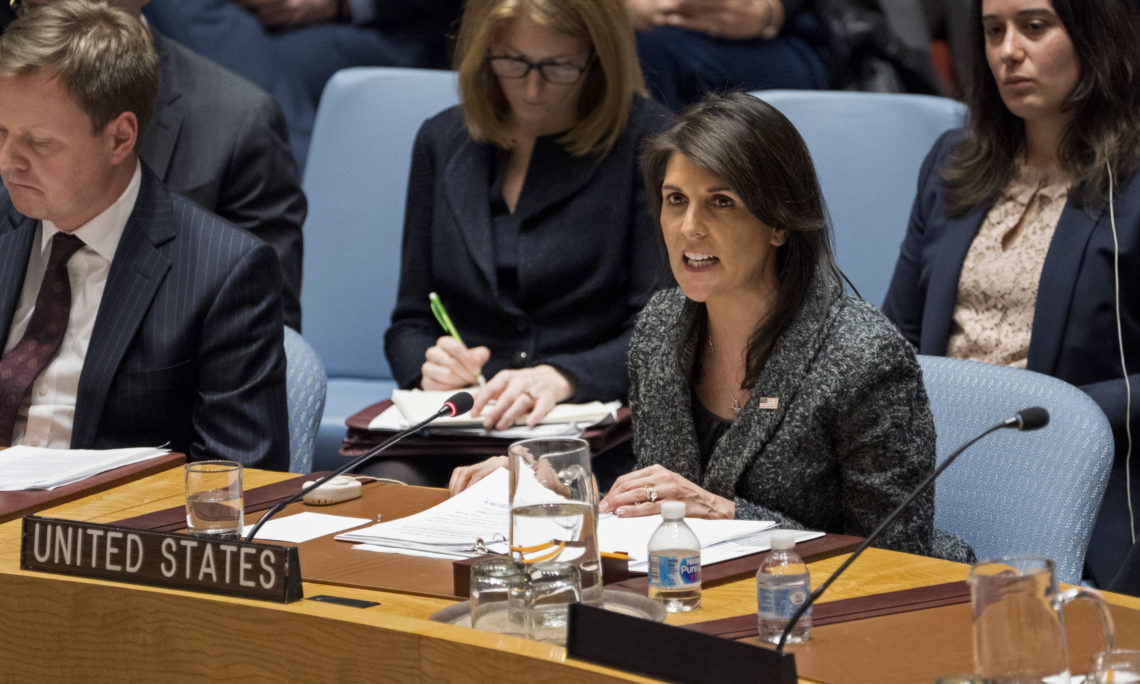 Thank you, Mr. President. And I want to thank the penholders, both Sweden and Kuwait, for their work and their sacrifice and their time in the negotiations. And as we look at the negotiations, I think it’s also important that we bring this Council some of the voices of the Syrian people in eastern Ghouta who have suffered so much while waiting for this Security Council to act.

A doctor treating patients in a makeshift hospital described the conditions she is facing: “We’re mental and emotional wrecks. There’s nothing more we can do. We are bled dry.”

In a haunting video, the doctor walks into a room with a crying mother as she says, “I’m waiting for my son to die. At least he’ll be free of pain. I was just making bread for him when the roof fell in. He’s going straight to heaven. At least in heaven there’s food.”

Another message we received yesterday – that I think was said to you in all of the closed consultations, but I think it’s important to say it again – was an emergency call from a doctor in eastern Ghouta: “We have a horrible situation here. We’re being targeted with all kinds of weapons nonstop. We lack everything: water, food, medical supplies, shelter. This is a disaster. Everyone is just waiting to die.”

Today, the Security Council finally took a step toward addressing these devastating levels of human suffering in Syria. The United States wants nothing more than to see the ceasefire in this resolution implemented immediately across the country.

It is critical that the Assad regime and its allies comply with our demand to stop the assault on eastern Ghouta and immediately allow food and medicine to reach everyone who needs it.

All of us on this Council must do our part to press the Assad regime as hard as we can to comply.

But we are late to respond to this crisis. Very late. On Wednesday, the Secretary-General made an emotional plea for an immediate ceasefire in Syria to allow the very basic necessities to get to the people. Kuwait and Sweden had a version of this resolution ready to go for a vote. But Russia called for a delay.

On Thursday, in an effort to stall, Russia called for an open meeting on the humanitarian situation in Syria. At that meeting, 14 members of this Council were ready to impose a ceasefire. But Russia obstructed the vote again.

And then yesterday, this Council sat around for hours, ready to vote, only to have Russia delay it again.

Every minute the Council waited on Russia, the human suffering grew. Getting to a vote became a moral responsibility for everyone, but not for Russia, not for Syria, not for Iran. I have to ask, why?

At least 19 health facilities have been bombed since Sunday. Nineteen.

As they dragged out the negotiation, the bombs from Assad’s fighter jets continued to fall. In the three days it took us to adopt this resolution, how many mothers lost their kids to the bombing and the shelling? How many more images did we need to see of fathers holding their dead children?

All for nothing, because here we are voting for a ceasefire that could have saved lives days ago.

And after all of this time, hardly anything has changed in the resolution except a few words and some commas.

The Syrian people should not have to die waiting for Russia to organize their instructions from Moscow or to discuss it with the Syrians. And why did the Council allow this? There is no good reason we shouldn’t have done this Wednesday, or Thursday, or Friday.

Today, Russia has belatedly decided to join the international consensus and accept the need to call for a ceasefire, but only after trying every possible way to avoid it.

This resolution marks a moment of Council unity that we must seize and maintain beyond the 30-day timeframe. We hope this resolution will be a turning point, where Russia will join us in pushing for the political settlement to this conflict and take action to re-establish real accountability for the use of chemical weapons in Syria.

Progress starts by adhering to the ceasefire with no excuses. After so many years of defying this Council’s demands, the Assad regime must change course.

None of us should be so naïve as to accept that the Assad regime can continue indiscriminately bombing schools, hospitals, and homes under the fake excuse of “counterterrorism.”

Assad’s bombing must stop. The ceasefire must be given a chance to work.

We look to the Assad regime’s backers, especially Russia and Iran, to address what the Secretary-General rightly called a “hell on Earth.” All eyes will now be on the Syrian regime, Iran, and Russia.

Our goal with this resolution is clear: The Assad regime needs to stop its military activities around eastern Ghouta, and for once, allow humanitarian access to all of those who need it.

We are deeply skeptical that the regime will comply. But we supported this resolution because we must demand nothing less. We owe this to the innocent people of Syria begging for help.

In the days to come, our resolve to stand by our demands in this resolution will be tested. All of us must rise to the challenge of maintaining this ceasefire, just as we came together today.

All of us must do everything we can to make the demands of this resolution a reality. It’s the only way to restore the credibility of this Council. The Syrian people have been waiting long enough.