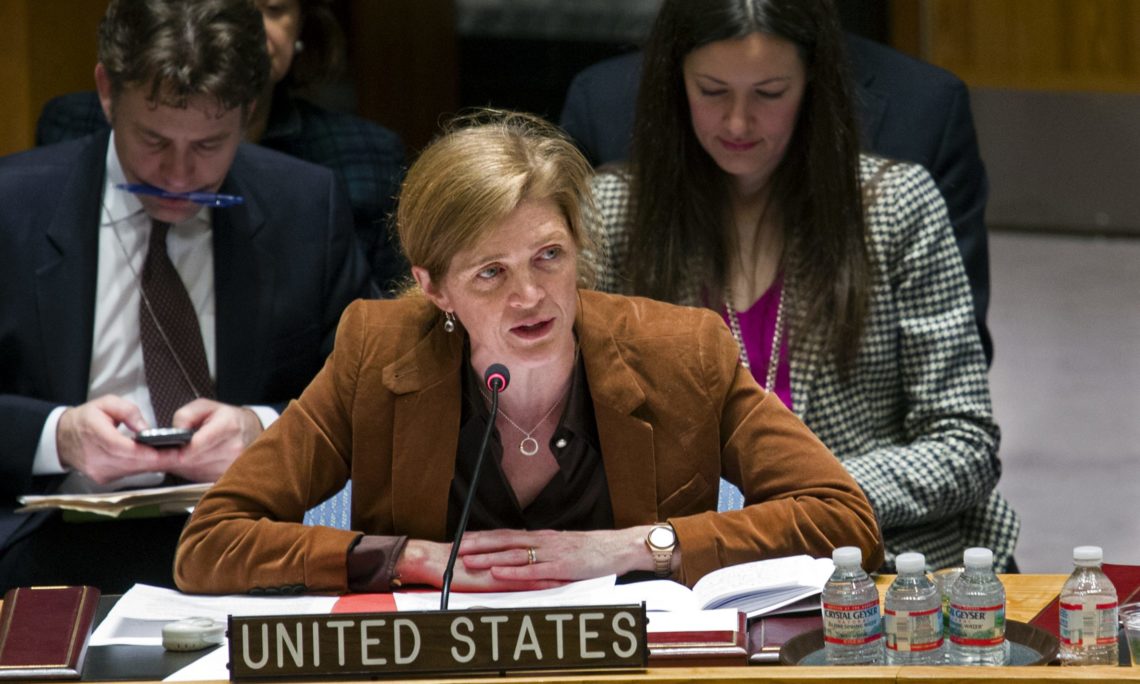 “Thank you, Mr. President. We are here today because the lives of 275,000 people hang in the balance in eastern Aleppo.

We have just heard about the immeasurable suffering of innocent men, women, and children who are trapped. In my brief time, I wish to speak to the causes and solutions for the humanitarian catastrophe in eastern Aleppo.

The causes are clear. First and foremost, the crisis is fueled by the bombs that Syrian and Russian planes and helicopters have been relentlessly raining down on civilians in eastern Aleppo. They strike the brave first responders who rush to dig survivors from the rubble. They strike the hospitals that try to save the lives of the wounded civilians who survive those bombings somehow.

The cause is also that Syria and Russia’s bombardment has made it impossible for humanitarian aid to reach the civilians trapped in the inferno they have created – blocking food, medicine, water, and other vital supplies – supplies needed to prevent starvation and death.

To be clear – in light of the recent exchange – Russia and the regime have allowed not a single food delivery or med evac since July 7 of this year. Syria and Russia will point to terrorism as the cause of eastern Aleppo’s humanitarian crisis. There are terrorists in Syria, clearly, and they must be eliminated. That is why the United States is targeting the Nusrah Front, and it is why the United States leads a coalition of nearly 70 countries against ISIL, which the Syrian government had taken virtually no action against. But let us be real: terrorists are not the ones dropping bunker-busting bombs on hospitals and civilian homes in eastern Aleppo, nor are they besieging civilians there – the Assad regime and Russia are.

Now, what is the solution? It is straightforward. The bombing and besiegement of civilians must stop. And not just for a few hours, or a few days, but permanently. The people of eastern Aleppo must be allowed full and unfettered, unimpeded access to humanitarian assistance.

You may hear Russia claim credit for briefly pausing its aerial assault on eastern Aleppo. But it is not and must never become praiseworthy to refrain from committing atrocities. One cannot get credit for taking an eight- or eleven-hour break in months of merciless bombing, particularly when that uncoordinated, unilateral break is not even long enough – yet – to allow the UN and its partners to deliver any aid to the people whose lives depend on it.

The solution is also for Russia to stop using the privilege of holding a permanent seat on the UN Security Council to veto every resolution that demands an end to the attacks.

And, finally, the solution is for all UN Member States to hold accountable those responsible for this crisis, and demand that they change their behavior. Accountability starts by speaking the truth about who is responsible for the unspeakable horrors we are witnessing. The perpetrators have names. When we don’t say “the Syrian regime” or “Russia,” we obscure responsibility in a way that each of us would find totally intolerable if we found our families or our neighborhoods pummeled like those in eastern Aleppo.

Now is not the time to equivocate or use euphemisms. Not when hundreds of thousands of lives are at risk. Not when the fundamental principles that this institution was created to uphold – and which our nations all committed to defend – are being trampled. We all must do our part in demanding an end to all actions that kill innocent Syrians. The value of this institution, and all it stands for, depends on it. I thank you.”