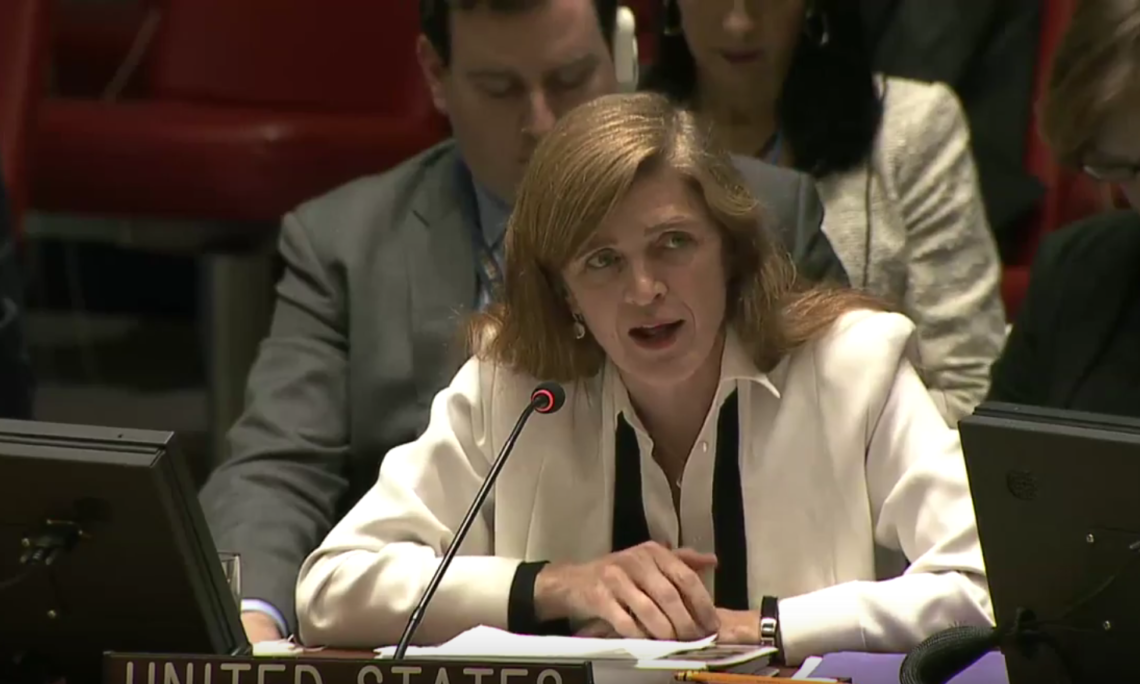 Thank you, Mr. President, and thank you, Under-Secretary-General O’Brien, WHO Country Director Hoff, for your comprehensive and deeply disturbing briefings. Thank you, as always, for presenting us with the unvarnished and unbiased facts. Your remarks show once again what happens when this conflict continues, and when Russia and the Assad regime relentlessly pummel civilian areas from the air and regularly block deliveries of humanitarian aid on the ground.

Of course, we will hear today from the Syrian regime, the Russian Federation; we will hear a very different narrative. Russia will no doubt talk at length about how its unilateral pause in airstrikes over eastern Aleppo was some kind of humanitarian gesture.

The reality is that the Assad regime and Russia are continuing their “starve, get bombed, or surrender” strategy in eastern Aleppo. Bombing the city’s 275,000 residents, pausing to see if any will surrender to the Assad regime – a regime that, as both we and the Syrian people know, has systematically tortured those who have found themselves under its custodial authority. Would any of us trust that regime with the lives of our family members, with our kids, with our parents, with our siblings? Consider that, when Russia paused their airstrikes over eastern Aleppo, they did so unilaterally, meaning that they never deigned to coordinate their efforts with the UN or any other organization actually providing aid. That was not a humanitarian gesture. Consider that, during this pause in strikes, Russia and the Assad regime never gave the UN permission to deliver a single parcel of food or medicine to eastern Aleppo. Not one. That was not a humanitarian gesture. Consider that Russian or regime planes dropped leaflets warning the people of eastern Aleppo to leave or be “annihilated,” as many of us discussed at our last briefing. And consider that residents of eastern Aleppo reportedly received text messages warning people to flee before a “strategically planned assault” would happen. Consider that, last month, Russia vetoed a resolution in this Council meant to end atrocities in Aleppo. These, also, were not humanitarian gestures.

And remember that eastern Aleppo is not an isolated case. It is part of a country-wide strategy. Across Syria, Russia and the Assad regime are waging a campaign that includes sieges, the blocking of humanitarian aid, the indiscriminate bombardment of civilian areas, and the use of barrel bombs.

So, members of this Council, we need to separate fact from fiction today. When we renewed the Joint Investigative Mechanism for Syria last week, I, and many of you, spoke about how we could not uphold the norm against chemical weapons use if we did not know what party was using chemical weapons. Here again, to uphold the humanitarian demands of this Council, we need to speak frankly and very specifically about which parties are responsible for the suffering of the Syrian people. That means condemning the atrocities committed by terrorist organizations like Jabhat Al-Nusra and ISIL, which the United States has done and will continue to do. But that also means telling the truth about Russia and the Assad regime’s actions.

Today, I will focus on just two features of regime and Russian terror. First, the Assad regime and Russia must stop the campaign of attacks that has destroyed countless schools, hospitals, homes, and other civilian infrastructure. Take just some of their recent airstrikes. Between November 13 and 15, five hospitals in Syria were struck. Five hospitals in two days. After airstrikes hit another hospital in eastern Aleppo on November 18, every hospital in that city is now reportedly out of service due to attacks by Russia and the Assad regime. Every single hospital serving a population of 275,000 civilians, out of commission. On November 6, an attack by the Assad regime on a Damascus suburb reportedly killed at least six children in a kindergarten. A kindergarten.

The United States recognizes that it is not just the Assad regime and its allies who are causing civilians to suffer in Syria. We condemn in the strongest terms all indiscriminate shelling by opposition forces into the civilian areas of western Aleppo. These attacks have reportedly caused more than 60 casualties just since November 1. We agree with Russia that there can be no justification for such attacks.

But, I ask, will Russia condemn even a single airstrike by the Assad regime here in this chamber today – or any day? Choose any of the hospitals that the Assad regime has destroyed, or any of the schools. Will Russia ever condemn its ally Bashar Al-Assad here at the Council for a single one of these attacks? We have been attending sessions like this one for more than five years. But, despite all of the carnage inflicted by their regime partners, they have uttered not one critical word. Not even one skeptical word.

Today, I would like to specify some of the names of those involved since 2011 in killing and injuring civilians by conducting air and ground-based Syrian government military assaults on cities, residential areas, and civilian infrastructure. The United States will not let those who have commanded units involved in these actions hide anonymously behind the façade of the Assad regime. We know who some of these commanders are. They include: Major General Adib Salameh, Brigadier General Adnan Aboud Hilweh, Major General Jawdat Salbi Mawas, Colonel Suhail Hassan, Major General Tahir Hamid Khalil.

Russia and the Assad regime’s merciless attacks must end. And those behind such attacks must know that we and the international community are watching their actions, documenting their abuses, and one day, they will be held accountable.

Now, I know right now, today, with wind at their backs, these individuals feel impunity. So, though, did Slobodan Milosevic, Charles Taylor, and countless war criminals before them. Today’s atrocities are well-documented, and the civilized world’s memories are long.

Second, the Assad regime must end the suffering and torture in detention centers throughout Syria. The regime continues to imprison tens of thousands of Syrians – including women, children, doctors, humanitarian workers, human rights defenders, and journalists – subjecting many to torture, sexual violence, and inhumane conditions.

Here is how a Syrian journalist named Shiyar described his experience at Military Intelligence Branch 235: “They had me stand on a barrel, and they tied rope around my wrists. Then they took away the barrel. There was nothing below my feet. They were dangling in the air. They brought three sticks…They were hitting me everywhere…After they were done beating me with wooden sticks, they took the cigarettes. They were putting them out all over my body. It felt like a knife excavating my body, cutting me apart.”

We know where torture has taken place and where it continues to take place. Facilities that include: Military Intelligence Branches 215, 227, 235, and 251; the Air Force Intelligence Investigation Branch in Mezzeh military airport; the Sednaya prison; and the Tishreen and Harasta military hospitals.

The United States will not forget the cases of the many Syrians who have suffered so much at the hands of individuals like these, and we will continue fighting to hold them accountable for their hateful crimes.

The United States, I want to stress, recognizes that non-state groups have also committed many abuses against detainees, including torture. We condemn any group using such tactics in the strongest terms, and we demand that immediate access be granted to monitor all detention facilities – whether regime, or terrorist, or opposition. ISIL’s atrocities are in a category unto themselves, which is why the United States leads a 67-member coalition to defeat this terrorist organization.‎

Let me conclude. In January, the UN and the world raised alarm that the people in the community of Madaya, besieged by allies of the Assad regime, were starving. Today we have reports of starvation again. Save the Children reported recently that Madaya is now also seeing an increase in child suicide attempts – something virtually unheard of in the town before. One of these kids is a 15-year-old named Omar. Omar told a reporter recently, “There’s nothing left for me here. And I felt the easiest thing to do was to kill myself. I tried to throw myself from the balcony, but it wasn’t high enough.” Omar’s dad is in jail. His mom had to leave Madaya, but she left Omar behind so he did not get recruited into the government’s security forces. “There’s nothing to eat,” Omar says. “We are being strangled here. It’s like I’m in prison.” And Omar has one other thought, one that you might expect from any teenager. “I miss my mum, waking me up in the morning,” he says.

We, not just members of this Security Council but all Member States of the United Nations, must be clear that the Assad regime, Russia, and their allies are responsible for this destruction – both physical destruction and, for countless children like Omar, psychological destruction. And in the face of this destruction, this overwhelming suffering, the perpetrators must know that the pursuit of a military solution is as foolish as it is brutal. Attacks on civilians fuel terrorism; they don’t defeat terrorism. The perpetrators must also know that, like their ignominious predecessors through history, they will face judgment for their crimes. Thank you.