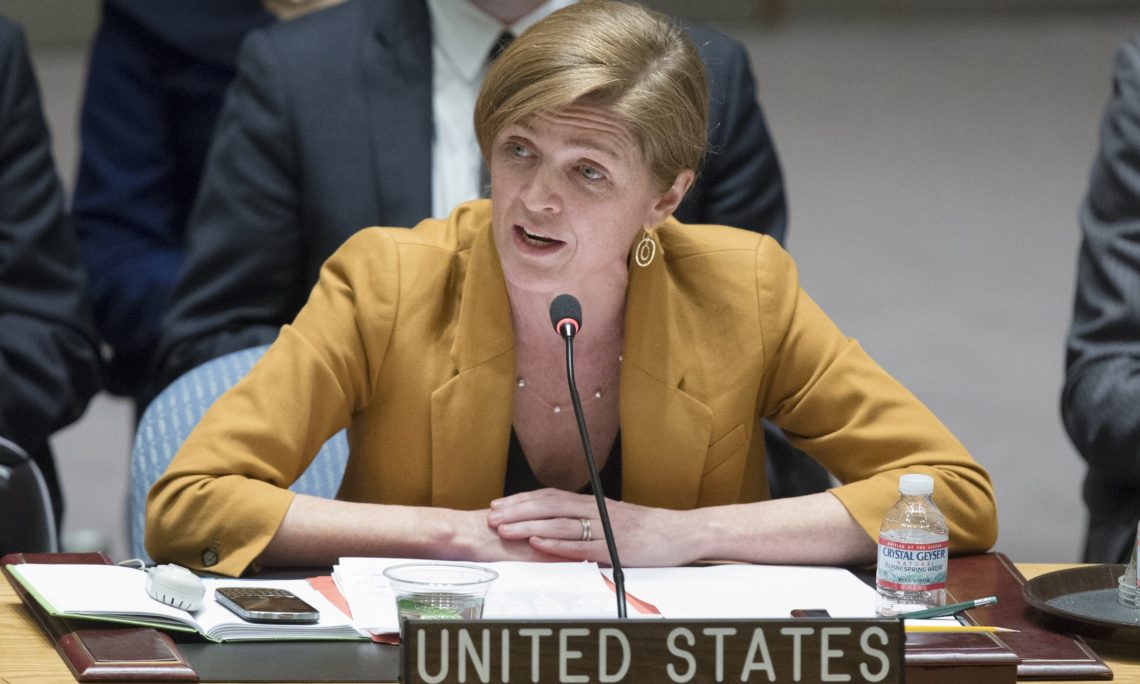 We have convened the Security Council today because the Russian Federation and the Assad regime have launched an all-out air and ground offensive against eastern Aleppo and its 275,000 civilians. Russia and Assad have reportedly launched more than 150 airstrikes over the last 72 hours, killing at least 139 people and injuring hundreds more, laying waste to what is left of an iconic Middle Eastern city.

These are people who have suffered horribly in the five and a half years of war, yet they call the attacks from the air “unprecedented in quantity and quality.” The Assad regime is explicit: it believes only in a military solution. It says it is going to conquer militarily every last square inch of Syria. And it does not care what’s left of Syria in pursuing that military solution.

Russia will argue today, no doubt, that these attacks are meant to fight terrorism, and that the people killed in this offensive are terrorists or terrorist sympathizers. This is absurd. Look at the facts. In the first 24 hours of their assault on eastern Aleppo – an assault, I would note, whose first strikes were carried out in the middle of meetings here in New York in which Russia was saying it wanted to recommit to a cessation of hostilities – Russia and the regime struck not one, not two, but three of the four bases used by the White Helmet volunteers in eastern Aleppo.

The White Helmets are first responders who bravely rush to the scene of bombings to dig through the rubble for survivors. Every day, they save lives by driving ambulances and fire trucks and – where there are no roads left, running on foot – to the homes, schools, hospitals, and markets that Russia and Assad have attacked. And the White Helmets continue to do this, even though they know that the regime routinely carries out now infamous “double-tap” airstrikes – in which they strike a target, wait for first responders to arrive, and then strike again. A month ago, the world was shocked by the dazed stare of five-year-old Omran Daqneesh as he sat in the back of an ambulance after his home was bombed. He was rescued by White Helmets. But because of Russia and Assad’s attacks these last few days, fewer kids like Omran are going to be rescued. Those buried alive in rubble in eastern Aleppo are much more likely to die in rubble.

Another target that the latest Russia-Assad offensive struck at its outset was the Bab Al-Nairab pumping station, as we’ve heard, which supplies drinking water to the people in eastern Aleppo. As a result, two months after the Assad regime cut off eastern Aleppo from deliveries of food, medicine, and humanitarian aid, residents will now be at risk of disease and infection as they drink whatever dirty, untreated water they can find. I would note that an opposition group also turned off a nearby pumping station that supplies water to some of the more than 1.5 million people in western Aleppo, which we condemn. Water should never be used as a weapon of war, and Aleppo’s residents should not be forced to drink water that makes them sick, wherever they live. This is obscene.

Eastern Aleppo remains under siege as we convene here today. It seems the only items making it into eastern Aleppo these days are barrel bombs and incendiaries that witnesses report seeing dropped by Assad’s forces and Russian forces. The combined impact on civilians of relentless airstrikes and blockades is crushing. Fuel for diesel generators – the main source of electricity – is running out. Within a week, there may not be enough power to keep producing bread. Bread. Hospitals – which have already relocated emergency rooms to basements and bunkers in an attempt to protect their patients from routine airstrikes – can barely keep the lights on. Because the electricity is so often knocked out, doctors have learned to conduct operations by the light of their cell phones. And yet each new airstrike brings them more and more maimed civilians, who they are forced to treat with fewer and fewer supplies. Look at the photos that people in eastern Aleppo have posted online in the last two days. Syrians slumped in blood-spattered hallways; men, women, and children covered in rags lying in pools of blood in these makeshift hospitals. Unconscious babies who need someone to pump oxygen into their lungs manually when generators fail. And if these victims need specialist treatment, they can’t get it. Even worse, they cannot leave eastern Aleppo. They are trapped, savagely, medievally. The UN assembled a convoy of trucks to deliver aid to eastern Aleppo more than a week ago, but it remains blocked by the fighting, unable to drive into this inferno.

Russia, of course, has long had the power to stop this suffering. The United States worked with Russia for eight painstaking months to develop an arrangement that included a renewed commitment to the cessation of hostilities. Just last week, the United States sponsored two ministerial meetings of the International Syria Support Group aimed at halting the violence and returning to a cessation of hostilities. We did so not because we think Russia has acted in good faith in Syria; we know as well as anyone that Russia has consistently said one thing, and done its opposite. We did so because we know that there can be no peace in Syria if Russia is determined to keep fighting this war. And we believe that we must do everything in our power to find a way to halt the violence, and get on the path to a political transition, which is the only way to end this conflict. That is why, even now, we will continue to look for any way possible to restore the cessation of hostilities.

But it is common sense: a one-sided cessation of hostilities cannot hold. You cannot carry out a massive military offensive and say you are for peace. That might work on Russia Today. But it doesn’t work when the world has reams of evidence proving exactly what Russia is doing.

Last Wednesday, Russian Foreign Minister Sergey Lavrov sat in this chamber and declared that, when it comes to Syria, “Russia has consistently advocated an exclusively peaceful solution.” Yet given when the offensive began, it is not unreasonable to think that Russian and Syrian forces were literally loading the incendiary munitions and barrel bombs onto their aircraft as Minister Lavrov spoke here of making peace. The next day, after Russia and the regime began to rain its bombs down on civilians in eastern Aleppo, Minister Lavrov told the press that plans for a cessation of hostilities “must be saved.” This is Russia’s approach to “saving” the cessation of hostilities? As the UN has said repeatedly – including today – these airstrikes on residential neighborhoods may well be war crimes.

Russia today will no doubt – again – accuse the United States of causing all of this chaos. They might point to the single airstrike, in which the Counter-ISIL Coalition appears to have struck a Syrian military position – a strike that we immediately acknowledged and committed to investigating in full. Russia will likely try to divert from its own actions by invoking U.S. actions elsewhere in the past. What you can be sure – sure – that Russia will not do today or any day is accept any responsibility for its actions. What you can be sure that Russia will not do is tell the truth.

Fellow members of the Security Council, I urge you now to look at the remarks that you have brought today and ask yourself: Does what I am about to read reflect the gruesome facts on the ground? Does it speak candidly to who is unleashing this appalling violence? Would I feel comfortable reading these remarks to a chamber packed with the residents of eastern Aleppo being besieged by Assad’s forces and by Russia? If not, I urge you to speak directly to Syria’s grim reality and the people who must live with it day in and day out.

Russia holds a permanent seat on the UN Security Council. This is a privilege, and it is a responsibility. Yet in Syria and in Aleppo, Russia is abusing this historic privilege. And while members of this Council – certainly including the United States – have a deep interest in having constructive ties with the Russian Federation, history will not look kindly on those Council members who stay silent in the face of this carnage.

Russia would have this Council live in “upside-down land,” where bombing first responders, cutting off humanitarian aid, and supporting a murderous regime is billed as counterterrorism. Let’s be clear: there are terrorists in Syria – lots of them – and all of us have an interest in destroying them. They pose a threat to all of our citizens. That is why the United States leads a 67-country coalition that has rolled back 40 percent of ISIL’s territorial holdings in Iraq and Syria, and which each week liberates more desperate civilians. That is why the United States negotiated the recent agreement with Russia, signaling that we were prepared to work with Russia to fight Jabhat Al-Nusra and ISIL in Syria. Nobody has to convince the United States of America of the danger posed by terrorists. Our citizens are often priority targets all around the world. But when Russia is espousing fiction, we have to call that out. What Russia is sponsoring and doing is not counterterrorism; it is barbarism.

Let me conclude. On Friday, footage emerged of the aftermath of one of the many recent airstrikes in eastern Aleppo. In the video, first responders dig through the rubble of what was once a building, throwing aside chunks of concrete. And then, suddenly, one hears on the video the piercing scream of a child. A child literally submerged in concrete and rubble. The first responders then began to dig more frantically, until the head and blue and white shirt of the little girl emerges. A girl crying out in pain and in terror. Eventually, tenderly, the first responders remove the rubble from around her, and pull that girl – five-year-old Rawan Alowsh – from the wreckage, her body covered in white dust. It feels like a miracle, watching her come out alive.

And yet, everyone else in Rawan’s immediate family was reportedly killed in that airstrike. Her mother. Her father. Her four siblings. All killed. What chance does Rawan have in this world – what chance does she have with no family, but also with not even a single sign that her attackers have a shred of empathy in them?

When violent attacks against civilians are surging; when norms of civilized behavior that we have spent more than 70 years trying to build are being trampled; when there is complete impunity for targeting aid convoys, civilian, residential neighborhoods, children, hospitals – impunity – what chance does Rawan or any of us have?

One first responder said of the relentless assault of the last few days: “People don’t know what to do or where to go. There is no escape. It feels like the end of the world.” The end of the world. It is apocalyptic what is being done to eastern Aleppo. Surely, for Rawan – who, at five years old, has lost her entire family – this Council can at the very least have the courage to say who is responsible for this. And, in a single voice, tell Russia to stop. Thank you.