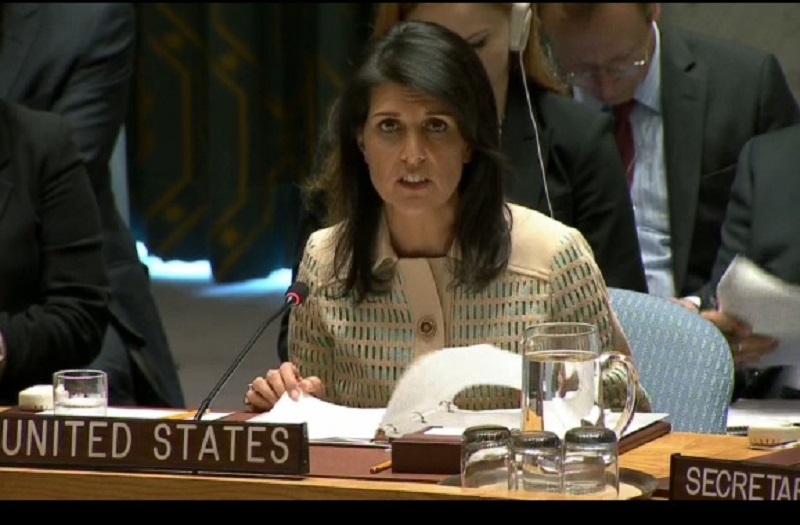 Thank you, Mr. President. Thank you, Under-Secretary O’Brien, for your briefing.

Last week I stood in the no-man’s land between Syria and Turkey, where trucks with life-saving humanitarian aid begin their perilous journey to reach desperate men, women, and children in Syria.

Over five days in Jordan and Turkey, I witnessed the generosity of these countries in providing Syrian refugees health and educational services. I met dedicated teachers and doctors who, with U.S. and UN help, are working to shape a better future for Syrians. I sat and spoke with refugee children and met the counselors who are helping them deal with the trauma that has marked their young lives.

Overwhelmingly, the displaced Syrian men, women, and children I spoke to want to go home. But tragically, the violence and brutality that led them to flee their homeland has continued since we last met. There is no peace in Syria, only continuing, appalling suffering. There is no home for these desperate people to return to.

The Syrian government continues to imprison tens of thousands of its people. It subjects them to such violence and inhumane conditions – including torture and sexual violence – that those who manage to survive suffer devastating and lasting damage. Their families suffer as well.

But the most persuasive indicator of the continuing hell that is life in Syria is what we’ve learned this past month about what has been built inside Assad’s notorious Saydnaya Prison. Amnesty International calls the prison a “human slaughterhouse.” Survivors report being approached by wardens inside with ropes and knives. They are then given a choice: kill friends and relatives also in the prison or be killed themselves.

The evidence comes from a combination of photographs of structural changes in the prison and estimations of the horrifying rate of killings behind its walls. It has led us to conclude that the Assad regime has constructed a crematorium in the prison to dispose of the victims’ bodies.

This is an appalling discovery. And even if they had no direct role in the construction of the crematorium, Russia and Iran have either aided in or passively looked away as the Assad regime commits atrocities that are reminiscent of the history’s worst war crimes.

It’s hard to fathom yet another regime so soulless that it has to devise a more efficient method of disposing of all the dead bodies it creates. But this is where the evidence leads us. We need Russia to use its influence over the Assad regime to bring an end to these atrocities.

Even those inside Syria who manage to avoid Assad’s prisons do not avoid suffering. The bombings of hospitals and schools continue unabated.

I want to thank Under-Secretary-General O’Brien for calling our particular attention to the staggering and unacceptable impact of this war on children. Countless Syrian children have lost family, friends, and other loved ones and witnessed firsthand the unspeakable horrors of war. For the more than three million Syrian children under the age of six – many now orphaned – war is all they have ever known.

As a recent report by Save the Children highlights, children wake up at night screaming from reliving those horrors as they fall asleep. They wet their beds; some have lost the ability to speak, while others tell their friends and families they would rather be dead than live another day hungry and afraid. Others turn to drugs as a way to cope with what they have endured. We witnessed firsthand the effects on these children, with many refusing to leave the house or struggling with fear of loud noises.

The UN, NGOs, and assistance providers have done an admirable job trying to assist these children, but the systems and structures that exist to provide care and support for children are eroding around them.

One in three schools in Syria have been destroyed or damaged, or they’re being used as a shelter for the displaced or being used for military purposes. More than half of Syria’s public health facilities have closed. In more than 75 percent of Syrian households, children have to help support their families – many of them the sole breadwinners. The psychological and physical toll on Syrian children could cost us an entire generation if action is not taken.

I applaud the UN for recognizing the challenges facing these children and recognize the UN-led “No Lost Generation” approach to provide counseling and education to school-age Syrians, other refugees, and vulnerable Jordanians who cannot always access formal education.

But the truth is no child should have to endure any of this. And this Council is in a position to chart a different course for the children of Syria and give them the future they dream of and that they deserve.

Ultimately, the best and only way to truly support these kids is by ending the conflict and getting them the assistance they need. Unfortunately, delivery of humanitarian aid continues to be blocked by the government.

The regime continues to put up bureaucratic roadblocks to the delivery of life-saving food and medicine. No one is fooled by the games they are playing. They are making the choice to starve their own people for political gain and are being supported by Iran as Russia looks the other way.

The message I took to the refugees I visited with last week was that the United States will never give up working to ease their suffering.

But we have to be honest: what they want – what they need – is to return home. But they will never have a home to return to until there is peace in Syria. In addition to the political solution, we must start to focus on the development needs of host countries, as well as the transition for Syrians to go home.

I was at a Turkish camp, and one of the refugees came up to me, and he asked that we remember that they need our support. He said that Assad is a brutal leader, and he said, “We’re happy when we listen to you and when you’re talking about us. Please don’t forget about the Syrian people.”

This must be our constant, overriding, and unfaltering purpose. Thank you.