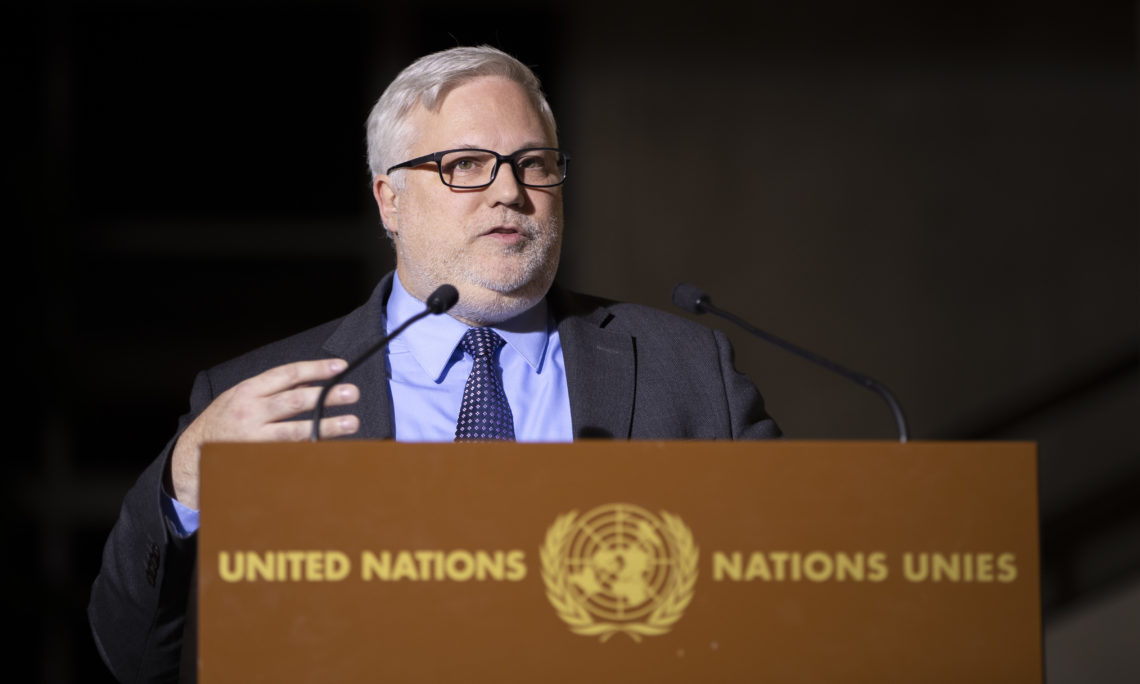 DAS Rayburn:  Good evening, everyone.  I’m Joel Rayburn.  I’m the U.S. State Department Special Envoy for Syria and also Deputy Assistant Secretary of State for Levant Affairs in the U.S. State Department.  It is my privilege to be here in Geneva this week heading a U.S. diplomatic delegation that has come here to support the launching of the Constitutional Committee for Syria under the auspices of the United Nations.  We’re also here to engage with members of the Constitutional Committee and members of Syrian civil society to offer our political and material support for the very serious work that they’re about to embark upon.

We greatly appreciate the work of UN Secretary General Guterres and UN Special Envoy Geir Pedersen for the incredible work that they’ve done, the many hours that they and their teams have put in to advance the political process as called for in UN Security Council Resolution 2254.  The United States strongly supports their efforts and the long-awaited launch of the Constitutional Committee that’s expected tomorrow.

This is a very positive step and there have been precious few positive steps in the Syrian conflict, but this is one.

Although it is a positive step, we have to keep in mind that there are many more that must follow in order to reach a political solution that will end this tragic conflict that has raged since 2011, a conflict in which the Syrian regime has brutalized its own people, resulting in the deaths of over 500,000 men, women, and children.

The Constitutional Committee is an opening to a political process under UNSCR 2254, and it will require serious engagement and commitment from all sides in order to succeed.  The United States considers this to be a top priority, and we will continue to invest a great deal of our energy, effort, and resources into trying to make it a success for the Syrian people and the entire international community.

The Syrians who have traveled to Geneva to take part in this effort must put their people first and participate constructively to create a constitution that respects the rights of all Syrians and truly offers a peaceful way forward to end this conflict.  There is no military force that can do this.  There is no military force that can bring stability, allow Syrians to return safely to their homes, or defeat terrorism.  And pursuing a military solution is pointless in this regard and will offer only more destruction and death.

We have the opportunity now before us to take advantage of this momentum to support the creation of a genuine and representative Syrian Constitution that can be a launching pad to other initiatives under UN Security Council Resolution 2254, such as the very important issue of the release of the many, many thousands of detainees that have disappeared into the Assad regime’s prisons and whose fate is unknown.  They’re unaccounted for.  As well as the necessary effort to hold free and fair elections in a safe and neutral environment for Syrians.

We believe the Assad regime must accept the will of the Syrian people to live in peace and not be threatened by targeted violence, arbitrary detention, starvation, and brutality.  And this is why we, the United States, continue to call for the implementation of all the aspects of UN Security Council Resolution 2254, including an immediate and genuine nationwide ceasefire including in Idlib where the Assad regime and its allies have been attacking civilian populations for the last six months.

There can be no military solution to the Syrian conflict.  Only a political solution.  And the launch of the Constitutional Committee shows there is a way to get there.

The launch of this committee represents, above all, hope for the Syrian people who have suffered for more than eight long years and haven’t had much cause for hope.  That’s why tonight the message from the United States to all the warring parties in Syria is to say the door is now open to a peaceful path out of this conflict.  Stop your fighting.  Come here to Geneva.  And come through the door to a political solution.

And for those warring parties who will continue to reject peace, to reject this call, and to pursue war instead, we say it’s your responsibility to explain to your people why you will continue to require them to send their sons to die and while you’ll continue to cause Syrians to be driven from their homeland when the door to peace has opened here in Geneva.  All that’s required now for the next step is to walk through it.