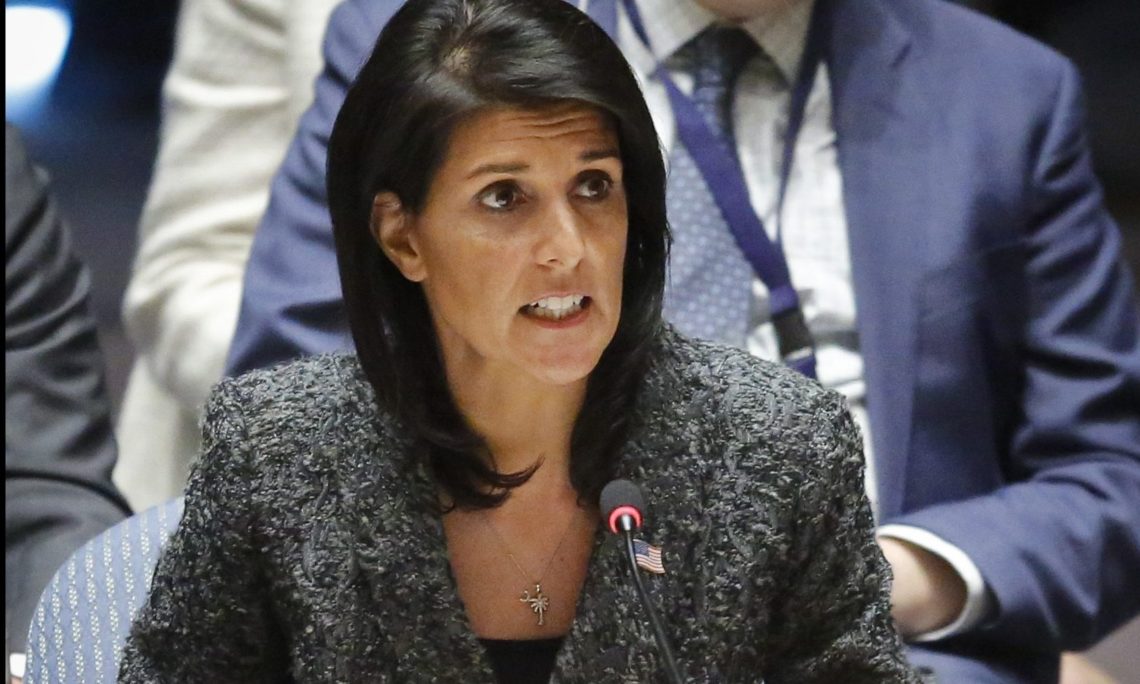 When you hear members of the Security Council speak about the use of chemical weapons, it’s pretty amazing because you have unity in the fact that we need to be concerned about chemical weapons use in Syria and elsewhere. That is why the blocking of this resolution is so troubling.

Russia and China made an outrageous and indefensible choice today. They refused to hold Bashar al-Assad’s regime accountable for the use of chemical weapons. They turned away from defenseless men, women, and children who died gasping for breath when Assad’s forces dropped their poisonous gas. They ignored the facts. They put their friends in the Assad regime ahead of our global security.

This Security Council banned the Assad regime from holding onto any chemical weapons in 2013. Still, Assad arrogantly continued to use these savage weapons. The Organization for the Prohibition of Chemical Weapons sent a fact-finding mission to Syria to investigate. The fact-finding mission confirmed that chemical weapons were used, but they lacked a mandate to say who was responsible. So the Security Council unanimously agreed to set up the Joint Investigative Mechanism to answer this obvious question: If chemical weapon attacks are happening in Syria, who is involved? Everyone on this Council – including Russia, including China – said at that time they wanted to know who used chemical weapons.

The question was answered; however, Russia and China didn’t like the answer. The investigators spent a year collecting mountains of evidence, speaking to witnesses, and verifying testimony. The conclusion was and remains irrefutably clear. The Assad regime used chemical weapons three times from 2014 to 2015, and ISIS used chemical weapons once. These are, of course, only the attacks that could be confirmed with limited time and resources. There are credible reports that Assad used chemical weapons many, many more times.

Amazingly, members are willing to condemn ISIS for the one incident, but turn a blind eye to the Member State, Syria, who committed this crime at least three times.

So now, Russia and China say they have questions about the investigation. They sat through almost a year of briefings by the investigators, and they never objected to their work. But now they suddenly say the investigation just wasn’t enough. Russia’s suggestion is for the Assad regime to investigate itself for use of chemical weapons. Are we going to have ISIS investigate themselves, too?

There is nothing wrong with the investigation. Russia just doesn’t want to criticize the Assad regime for using chemical weapons. That’s the truth.

So what message are we sending to the world? If you are allies with China and Russia, they will cover the backs of their friends who use chemical weapons to kill their own people.

Other Council members say the timing isn’t right for a resolution or that we should delay the vote for the sake of Council unity. But let’s remember: because the Assad regime used chemical weapons, people died in one of the most brutal ways possible. We got confirmation of the Syrian regime’s involvement. The question should not be whether to wait longer; the question should be why haven’t we acted sooner.

Now step back from the Security Council. The reason we all should care about this resolution is that we want to make sure no one ever thinks about using chemical weapons. Watch some of the videos online from the regime’s chemical weapons attacks in Syria. Watch the rows of parents and children, lying on the ground, suffocated to death. Watch Syrians gasping for breath in makeshift hospitals, desperate for oxygen to stop from gagging on chlorine. The suffering is inhumane. It’s grotesque. It should shake every one of us to our core.

None of us should hesitate to impose consequences for these attacks. No one else should get the idea that they can use chemical weapons.

Shamefully, today’s resolution was not adopted. The names of people and companies involved in Assad’s use of chemical weapons are public – all listed in the annex of this draft resolution for everyone to see. The United States has already designated for sanctions every person and every entity listed in the annex. We will work with our EU and other like-minded partners to push for similar sanctions as soon as possible.

We will not forget the overwhelming suffering caused by Assad’s use of chemical weapons.

So – for my friends in Russia – this resolution is very appropriate. It is a sad day on the Security Council. When members start making excuses for other Member States killing their own people, the world is definitely a more dangerous place. Today, the international community can look no further than the Security Council for contributing to that.