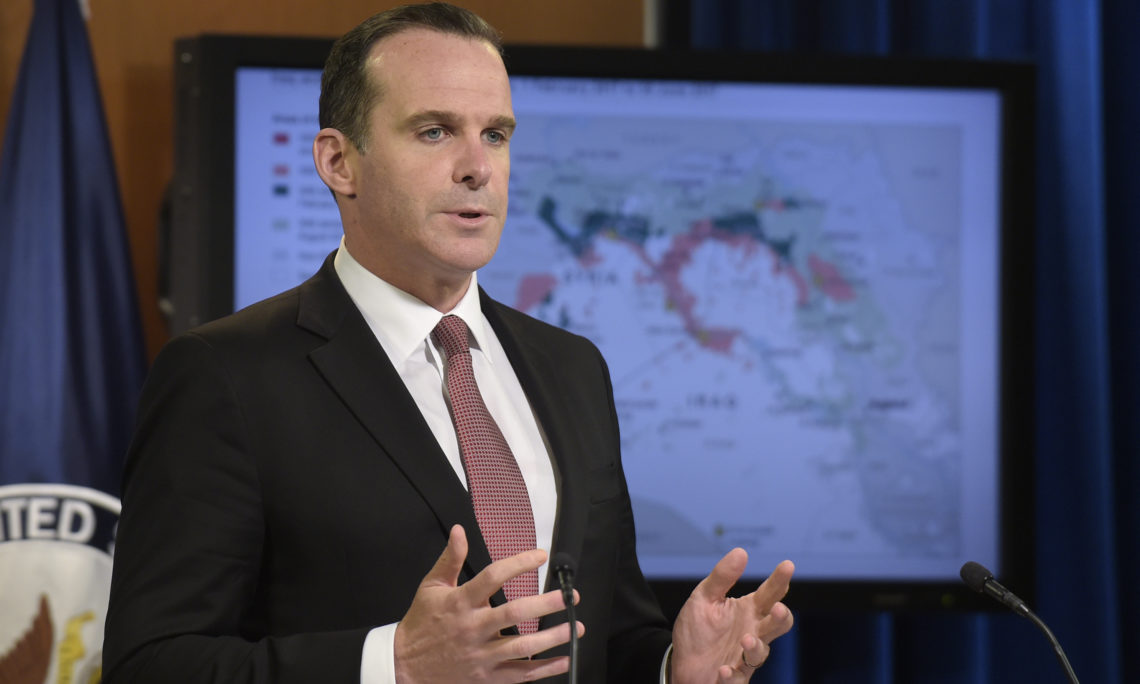 I write to reflect on the accomplishments of our 74-member Global Coalition to Defeat ISIS over this past year, with a look ahead on much left to do in 2018.

First, we congratulated the Government of Iraq for the full liberation of Iraqi territory from ISIS control. The difficulty of this achievement cannot be overstated and was a direct result of the strong leadership of Prime Minister Abadi and the heroic efforts of the Iraqi Security Forces and the Kurdish Peshmerga, many of whom lost their lives fighting ISIS on behalf of us all. As a Coalition, we have been proud to support our Iraqi partners throughout this hard-fought campaign, including training more than 126,000 members of the Iraqi Security Forces, and supporting stabilization and humanitarian initiatives in the wake of military operations.

Now, we must follow through. Our work over the coming year will require intensified effort to stabilize communities liberated from ISIS. We commend those partners who have contributed to the United Nations Development Program’s Funding Facility for Stabilization (FFS). This program has a remarkable record of accomplishment: 2.8 million Iraqis back in their homes, and not a square meter of ground reclaimed by ISIS. From Mosul, to Ramadi, Fallujah, and Tikrit, we have seen communities come back to life due to the resiliency of the Iraqi people, and the partnership between the Government of Iraq and our Coalition through FFS.

FFS now faces a shortfall, however, of nearly $300 million. Closing this gap is an urgent priority, particularly for west Mosul where hundreds of thousands remain displaced. I am confident that our Coalition will answer the call to close this gap and more – between now and our next Coalition ministerial meeting in Kuwait City early next year. This will be an important meeting, and we are grateful for our vital partner Kuwait, which agreed to host us, as well as the reconstruction conference for Iraq co-sponsored by the World Bank.

As our Coalition remains focused on prioritized stabilization, Iraq’s long-term reconstruction is also getting underway thanks to the efforts of the World Bank, International Monetary Fund, and Government of Iraq reforms. Together, these initiatives have helped stabilize the Iraqi economy and injected billions of dollars into areas of desperate need. Reconstruction will be a multi-year process, dependent upon Iraqi reforms, international financing, regional trade, and creating the conditions for private investment. We welcomed a historic opening between our partners Saudi Arabia and Iraq this year, and look forward to the reconstruction meetings in Kuwait City.

On the security side, we will continue to support the Iraqi Security Forces as they transition from major combat to stability operations with emphasis on training, logistics, intelligence, protecting borders, and counter-terrorism support. Our military team led by CENTCOM will be in touch with counterparts in capitals of military contributors, as we work to support the Government of Iraq to ensure that ISIS can never again terrorize Iraqi citizens and threaten our homelands.

In Syria, we made significant progress in 2017, with a focus on defeating ISIS and de-escalating the underlying civil war that created the conditions for ISIS and other extremist groups to grow and carve out sanctuaries. We are grateful for the efforts of our founding partner Turkey in halting the flow of foreign fighters in and out of Syria and hosting over 3 million refugees.

I also want to recognize our partner, the Syrian Democratic Forces (SDF), for their sacrifices in liberating approximately 50,000 square kilometers from ISIS, including what had been its de-facto capital of Raqqa. At the start of this year, ISIS was planning major external attacks from Raqqa; today, Raqqa is no longer an ISIS sanctuary, thanks to the SDF, which suffered over 1,000 casualties in an extremely difficult five-month battle.

The fight is still ongoing in Syria. As I write this letter, SDF units are engaged in operations to remove ISIS from the Euphrates River Valley, and we anticipate these operations will continue over the first quarter of 2018. The focus will then shift to stabilization, and the United States is prepared to remain in Syria until we are certain that ISIS is defeated, stabilization efforts can be sustained, and there is meaningful progress in the Geneva-based political process pursuant to UNSCR 2254, ultimately leading to constitutional reform and UN-supervised elections.

As in Iraq, we will require significant Coalition contributions to support stabilization in areas of Syria we have helped liberate from ISIS. Stabilization is non-political, life-saving work: removal of explosive remnants of war, restoration of water, electricity, and health services. I would ask all of you to find ways to contribute, whether through the Syrian Recovery Trust Fund, NGOs on the ground in Syria, or other coordinated means. Through the donor consortium our Coalition established this year in Amman, we can connect your experts with specific and essential projects, such as de-mining critical infrastructure in Raqqa, restoration of water pumping stations, or refurbishing electricity grids. Our aim is to enable return of Syrians displaced by ISIS and to help local citizens take charge of their areas as we work on a national settlement in Geneva.

Outside Iraq and Syria, our Coalition remains focused on ISIS networks and affiliates. At the ministerial Secretary Tillerson hosted in March, we reaffirmed the principle that it takes a global network to defeat ISIS’s financial, propaganda, and foreign terrorist fighter (FTF) networks. We have since strengthened our global connections in these areas, and expanded our unprecedented information sharing platforms to protect our homelands, uproot ISIS cells, and combat ISIS propaganda on-line. These efforts have stopped attacks, and they will strengthen in 2018.

Significantly, our Coalition partner INTERPOL now has 43,000 names in its ISIS database, with contributions from 60 partners and information collected from the battlefields in Iraq and Syria. Led by the efforts of many in our Coalition, this month the United Nations Security Council passed UNSCR 2396 that complements our work and provides greater focus on measures to address returning and relocating FTFs. The private sector is also fully engaged to remove ISIS propaganda online, and our key partners Saudi Arabia, UK, UAE, and Malaysia have seized the forefront in combating ISIS in cyberspace. Our Coalition Twitter handle @Coalition provides regular update of our activities, and the innovative work of the Sawab Center in UAE and the Etidal Center in Saudi Arabia now eclipses extremist content and exposes ISIS’s lies.

We enter 2018 knowing that we must continue working side-by-side – Coalition partners, international organizations, law enforcement agencies, and the private sector – to sustain our progress. It is our collective aim as a Global Coalition to pressure and suffocate ISIS wherever it may seek to emerge, raise funds, or send operatives across borders. UNSCR 2396 will further enable our work with key provisions on use of traveler data in border screening and for the collection and use of biometrics to validate identities and constrain ISIS movements.

Finally, I would like to welcome our newest members Djibouti, Chad, Niger, Ethiopia, and Cameroon. Your membership highlights our increasing focus on ISIS and other extremist networks in Africa, particularly as we support our partner Libya as it rebuilds after successful operations to oust ISIS from Sirte. We were also proud to welcome NATO earlier this year, recognizing its critical counter-terrorism capabilities, and important role in training Iraqi forces.

On behalf of President Trump and Secretary Tillerson, we thank all of you for your participation in what is now the world’s largest-ever Coalition of its kind. Thank you in advance for the historic work we will continue to do together in 2018.