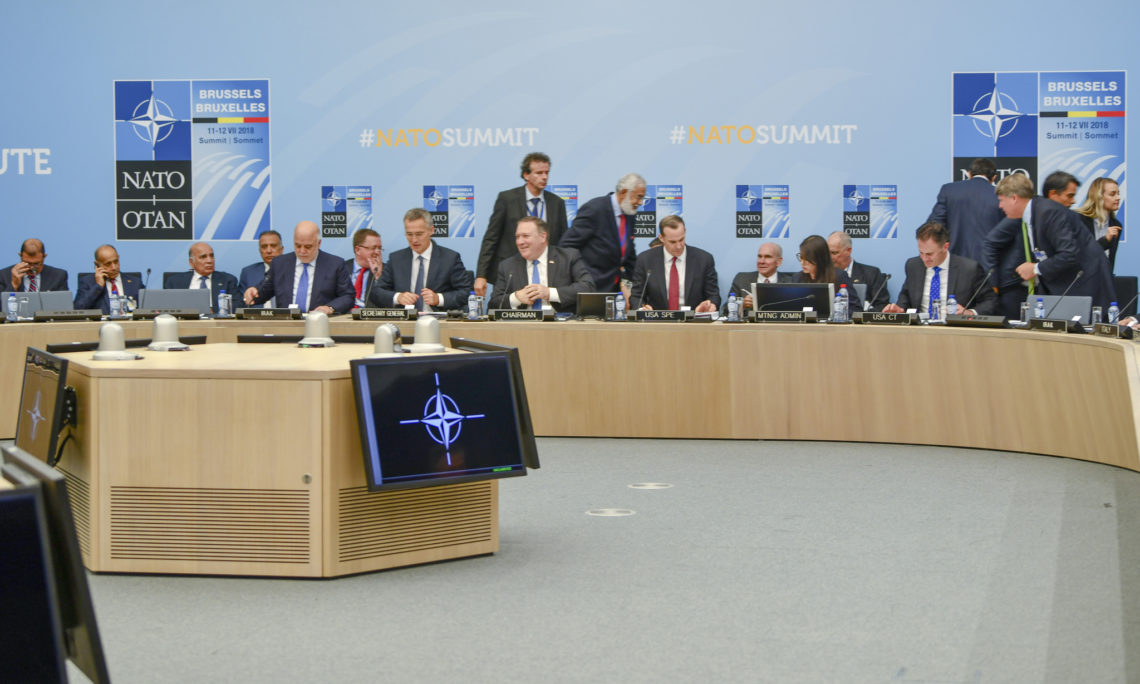 U.S. Secretary of State Michael R. Pompeo and NATO Secretary General Jens Stoltenberg hosted a meeting with the foreign ministers of select members of the Coalition to Defeat ISIS on the sidelines of the NATO Summit on July 12.

The Coalition recognized the extraordinary effort made by the Iraqi Security Forces to defeat ISIS and to continue to secure liberated territory and local populations from this barbaric enemy. In keeping with the Guiding Principles that the Coalition unanimously affirmed in February, the Coalition discussed the importance of the enduring defeat of ISIS in Iraq and Syria, and the Coalition’s collective denial of ISIS’s global ambitions. The Ministers welcomed the presentation from Prime Minister Abadi and the Government of Iraq’s $500 million pledge to support stabilization programs in liberated areas in coordination with the United Nations Development Programme. Members also unanimously commended NATO’s formal launch of the non-combat training mission for Iraq.

Ministers also welcomed the continued efforts and progress by the Syrian Democratic Forces (SDF) to liberate the remaining pockets of ISIS-held territory in eastern Syria. The SDF continue to work with the Coalition and its partners on the ground to clear the final vestiges of ISIS territorial control and to secure the Syria-Iraq border. ISIS has historically exploited transit routes along the Iraq-Syria border in order to attack and destabilize both countries. To ensure the lasting defeat of ISIS, we must continue to eliminate these and other cross-border networks.

This meeting was also an opportunity for Ministers to discuss and pledge immediate stabilization assistance to support areas of Syria liberated from ISIS in Coalition-supported operations. Coalition-funded stabilization programming remains key to securing D-ISIS military gains and will remain integral to stabilizing liberated terrain and addressing drivers of extremism. ISIS has not reclaimed any areas that it has lost in Coalition-supported operations and Secretary Pompeo reaffirmed the critical need for stabilization assistance to maintain this record. Even in the most difficult environments, such as Raqqa, Coalition-supported partners are clearing explosive remnants of war; delivering humanitarian assistance; removing rubble; restoring essential services like electricity, healthcare and water; and creating the conditions for IDPs to voluntarily return home. In Raqqa, this assistance is supporting 138,000 residents who have returned since the city’s liberation last October. In Tabqa, Coalition assistance has enabled the refurbishment of the Tabqa Hospital, which ISIS used as one of its command centers in northeast Syria. Today, as a result of this Coalition assistance, approximately 500,000 people in the Tabqa area can now access emergency and maternal care.

The Coalition meets regularly to coordinate, and enhance combined efforts to defeat ISIS, both at the senior leaders and working group level. The last meeting of foreign ministers of Coalition leaders took place on February 13 at the Ministerial level in Kuwait. In June, Coalition Political Directors met in Morocco, raising $90 million for our stabilization programs in Northeast Syria.