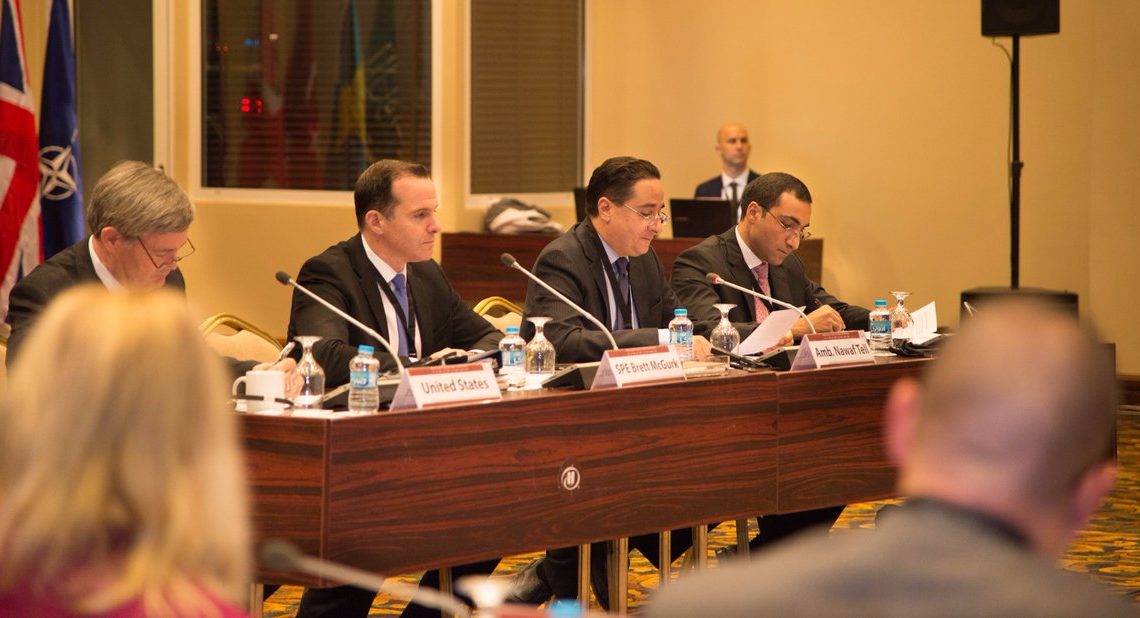 Senior diplomatic representatives from the Small Group of the Global Coalition to Defeat ISIS met today in Jordan to review our global campaign to defeat this terrorist organization. Special Presidential Envoy for the Global Coalition Brett McGurk provided an update on progress in Iraq and Syria. He noted since our coalition was formed in 2014, ISIS has lost 95 percent of the territory it once controlled in Iraq and Syria. More than 7.5 million people have now been liberated from ISIS, 2.6 million displaced Iraqis have returned to their homes, and ISIS has not recaptured a single meter of the territory it has lost. He discussed the accelerated campaign that President Trump authorized in January and emphasized the need to intensify humanitarian and stabilization support to ensure these trend-lines continue, and ISIS’s defeat is enduring.

Coalition members thanked the United States for its leadership of the Coalition – now among the largest in history, with 74 members, including NATO, the Arab League, the European Union, and INTERPOL. They reiterated unwavering commitment to support our partners in Iraq and Syria and ensured follow through on the hard work of stabilizing liberated areas to enable the safe and voluntary return of those displaced by the violence. Today’s meetings also included the inaugural session of the Donor Consortium for early recovery in Syria. Launched during the July Coalition meeting in Washington, the Coalition’s most committed nations came together to focus on how to address the most critical essential service requirements within Raqqa City.

Special Envoy McGurk also reviewed progress across other lines of effort. He briefed that foreign terrorist fighter (FTF) flows into Syria have nearly stopped, and FTFs across borders are increasingly being tracked and disrupted. The Coalition has been instrumental in developing the INTERPOL database ‎of 43,000 names to enable all partner states to catch FTFs during routine traffic stops or as they attempt to cross an international border. ‎ ISIS’s finances are now at their lowest levels to date, and pressure is only increasing. The Coalition is also countering ISIS’s message 24/7, working with partners to establish a network of messaging centers and initiatives that expose, refute, and combat terrorist propaganda.

We are applying simultaneous pressure on ISIS on the ground and in cyberspace. We are enhancing cooperation and border security, aviation security, law enforcement, financial sanctions, counter-messaging, and intelligence sharing to prevent ISIS from carrying out attacks in our homelands. Coalition members emphasized the importance of continued close coordination, which has resulted in a significant degradation to ISIS’s foreign terrorist fighter, messaging, and financial networks.

ISIS no longer has a capital, and its so-called caliphate is crumbling. They are running out of places to hide, and we are determined to ensure that they have nowhere to retain safe haven, from Libya, to the Philippines, to Afghanistan. This will be a generational fight that requires continued international cooperation.

The discussions today build on the meeting of Coalition defense ministers last week in Brussels, and set the ground for a meeting of foreign ministers early next year. The meetings closed today with members united in their resolve to further strengthen coordination to defeat ISIS across all lines of effort. The United States and all members particularly thanked Jordan for its hospitality in hosting the event and for the leadership of His Majesty, King Abdullah II, from the earliest days of the campaign. The Coalition also recognized the losses suffered to date, including the heroic Captain Kasasbeh of Jordan in 2015. His memory unites our unwavering resolve and commitment to finish the job.