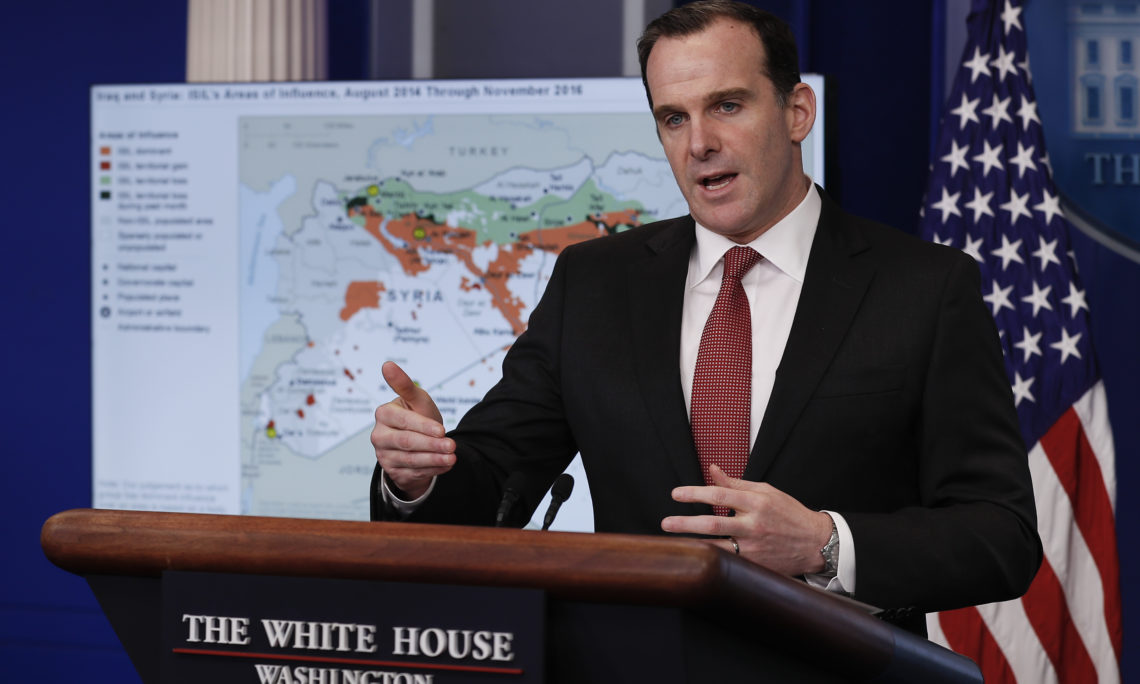 FILE - In this Dec. 13, 2016 file photo, Brett McGurk, White House envoy to the U.S.-led military coalition against the Islamic State group, speaks about the conflict in Syria during the daily news briefing at the White House in Washington. The senior U.S. official said Monday, May 15, 2017 that the
Media Note
Office of the Spokesperson
Washington, DC

On June 28-29, Special Presidential Envoy for the Global Coalition to Defeat ISIS Brett McGurk was in Syria to consult with local partners on the campaign to defeat ISIS. He also witnessed first-hand the humanitarian and stabilization assistance that is underway in liberated areas north of Raqqa, and held intensive discussions with local leaders and councils on post-liberation governance issues. Mr. McGurk also met with the Raqqa Civilian Council to discuss stabilization efforts in post-ISIS Raqqa.

Once Raqqa is liberated, it is critical that local officials from the area take over responsibility for post-liberation security and governance. We are working intensively with myriad local entities to prepare for this transition though, as Mr. McGurk noted throughout his visit, the battle to liberate the city has just begun. He also credited the bravery and sacrifice of the Syrian Democratic Forces in their ongoing operations against ISIS.

Mr. McGurk also visited Tabqa city, liberated from ISIS on May 10. While the city is still digging out from the terror of ISIS and the month-long battle to liberate it, Mr. McGurk met with local leaders coordinating assistance that has begun to flow, such as food deliveries, hygiene kits, relief items, and chlorine to provide safe drinking water.

He visited the Tabqa Dam, which ISIS terrorists held for three years as a headquarters and fortress. Since the dam’s liberation, it has been cleared of mines and work is underway to restore its operations to deliver electricity to surrounding areas. Mr. McGurk credited the courage of those who have worked to clear land mines and IEDs left behind by ISIS throughout Tabqa.

As we accelerate our campaign and territory is liberated from ISIS, the United States and other Coalition partners are supporting the UN and NGOs who are working to provide humanitarian assistance to vulnerable populations, and other actors that are working to establish basic security, re-establish essential services, and restore local economies to stabilize communities and allow Syrians to voluntarily return home. It is critical that we remain closely linked with partners on the ground to coordinate both military and civilian efforts to sustain momentum against ISIS.

In all of his meetings, Mr. McGurk emphasized the importance of unity of effort and local control of liberated areas following the ‎defeat of ISIS. He looks forwarding to welcoming all members of our coalition to Washington for meetings at the political directors level in July to organize and coordinate the next phases of our global campaign.