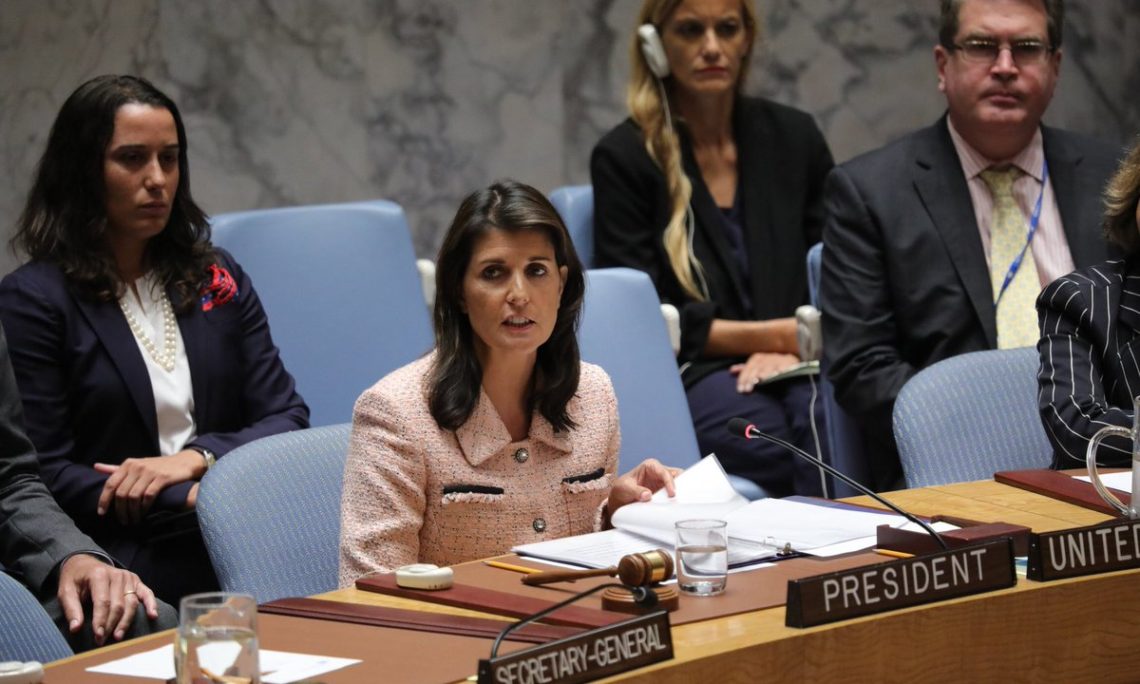 I want to start by, obviously, thank all of you for your heartfelt condolences and wishes. You are my brothers and sisters. And I think it’s why when we talk about something like Syria, we are all very passionate about it – because we know what pain feels like and we know what suffering is and we get frustrated when we see things happening that we can’t control.

This session was called for the purpose of discussing the Astana talks for a peaceful solution in Syria. We welcome the opportunity to discuss the prospects for a diplomatic solution in Syria. But let’s not waste time with the disinformation, distractions, and outright lies that the Assad regime and their Russian and Iranian partners constantly use to distort this conversation.

Let’s talk about the facts on the ground in Syria. This month already, the world has seen a clear military escalation in Idlib. Russian and Assad regime air forces launched over 100 airstrikes. They are using barrel bombs, rockets, and artillery. They are targeting hospitals and medical facilities. They are conducting ruthless “double-tap strikes” on civilian volunteers like the White Helmets. For those listening who haven’t heard of double-tap strikes, that’s when pro-regime forces strike an area, wait a few moments for first responders to arrive, and then strike again. It is a disgusting tactic of terrorists, not professional soldiers.

According to the UN, over 30,000 people have already been displaced by ongoing airstrikes. We’ve heard a lot of talk today. But we haven’t seen any actions to indicate that Russia, Iran, and Assad are interested in a political solution. All we’ve seen are the actions of cowards interested in a bloody military conquest of Idlib.

Turkey learned this lesson last week when they met with Russia and Iran. Turkey wanted them to agree to a ceasefire in Idlib. But Russia and Iran rejected Turkey’s request. And the Assad regime continued its brutal attacks.

The United States is long past taking Russia and Iran at their word that they are interested in protecting civilians in Idlib from further violence. No matter what type of weapons or methods are used, the United States strongly opposes any escalation of violence in Idlib. Every member of the Security Council should feel the same.

It’s time for Russia to stop wasting our time when it comes to peace in Syria. Russia and Iran have had every opportunity to demonstrate their credibility as constructive actors in Syria. But what have they done with these opportunities? They created so-called de-escalation zones throughout Syria which they have cynically, systematically, and ruthlessly violated.

In February they violated the de-escalation zone in Eastern Ghouta. Then in July, Russia blatantly broke a commitment made by President Putin and President Trump to uphold a ceasefire arrangement in southwest Syria. Now, in Idlib, Russia and Iran are violating their last remaining, so-called de-escalation zone.

Russia, Iran, and Assad are demolishing Idlib and asking us to call it peace. But here’s the reality: Astana has failed. It has failed to stop the violence or to promote a political solution.

We will know that the Assad Regime and its enablers are serious about a political process for peace in Syria, not when they repeat empty promises, but when the violence stops. When the airstrikes and the ground offensive stop. When they allow the UN to deliver life-saving humanitarian aid to civilians and allow civilians the freedom of movement to escape the impending siege. When they work with us to pursue real terrorists, not to create more of them by targeting innocent civilians. When we see irreversible progress occur through the UN-led Geneva talks toward a political transition in line with Resolution 2254. When we see Iran’s influence over events in Syria completely extinguished.

We will not allow Iran, through the façade of the Astana Process, to hijack the future of the Syrian people. Iran’s role in Assad’s murderous attacks on civilians will not be ignored by the United States and the rest of the international community.

We consider any assault on Idlib to be a reckless escalation of the conflict. If Assad, Russia, and Iran continue down the path they are on, the consequences will be dire. The world will hold them responsible. And no number of Security Council meetings will ever change that.