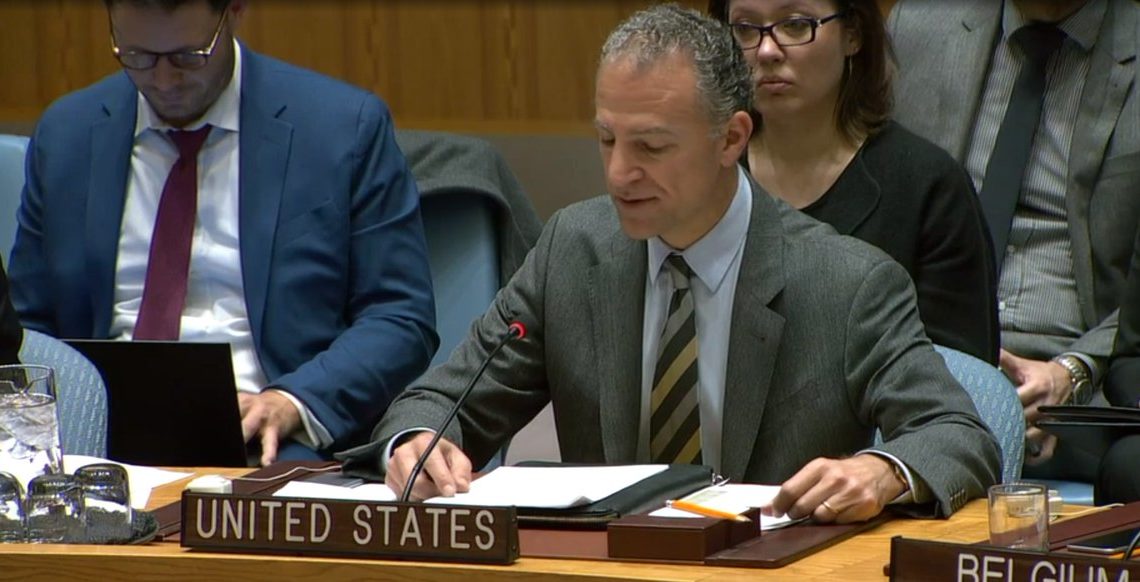 Thank you, Mr. President, and thank you, Ms. Ghelani, for your briefing and for the important work that the UN Office for the Coordination of Humanitarian Affairs and your partners are doing to support the Syrian people.

Mr. President, we applaud OCHA’s work to facilitate the largest ever humanitarian aid convoy in Syria during the successful February 6 joint UN and Syrian Arab Red Crescent delivery from Damascus to the Rukban encampment. The United States also salutes the courage and the selfless dedication of the humanitarian workers who so bravely carried out the delivery to ensure that life-saving aid reaches Syrians in desperate need.

While this convoy was successful in achieving its aim of providing immediate support to the Rukban population, this assistance will only sustain the population for approximately 30 days. Therefore, the United States urges the Assad regime and the Russian Federation to facilitate a new UN-Syrian Arab Red Crescent humanitarian convoy to Rukban before the end of March.

The Assad regime and the Russian Federation can ensure, if they have the will, that the UN can regularly provide unfettered humanitarian assistance to Rukban as long as there are vulnerable civilians at this location.

Mr. President, the United States has not impeded, and will not impede, any voluntary departures, and has long advocated for freedom of movement for IDPs throughout Syria. We remain steadfast in our support for safe, voluntary, dignified, and informed departures from Rukban. The United States insists that any process to arrange for departures be coordinated with the UN and reflect humanitarian principles.

To that end, the U.S. takes note of the UN’s receptivity to all efforts that will ease the suffering of those displaced in Rukban, including Russia’s checkpoint initiative – as long as those initiatives allow for truly safe, voluntary, dignified, and informed departures. The U.S. looks forward to continuing to coordinate with the UN, Russia, and other partners to develop a plan to support voluntary and informed returns from Rukban that best address the long-term needs of the population.

The U.S. calls on all parties, including Russia and the Assad regime, to ensure the following five minimum conditions are met on departures from Rukban: One, that any planning be coordinated with the UN, and allow for UN monitoring and oversight of movements, ensuring departures are in line with humanitarian standards; Two, that IDPs be given access to information about potential departure options and accurate information on conditions, including security, in their preferred place of return; Three, that guarantees be provided against arbitrary arrest and detention; Four, That a clear explanation be provided of military conscription requirements for IDPs who decide to leave; and five, that sustained humanitarian access be facilitated to allow aid to reach those who do not wish to depart Rukban.

Mr. President, Rukban is only one example of the extreme and challenging humanitarian conditions faced by millions of people throughout Syria. The regime has an obligation under Resolution 2165 to enable the immediate and unhindered delivery of humanitarian assistance by the UN and its implementing partners. It’s unacceptable that the Assad regime continues to hinder regular access for the UN and other relief agencies to eastern Ghouta, Yarmouk, and Dara’a.

When civilians cannot count on the Assad regime and its allies to allow the UN to provide sustained, unfettered humanitarian aid to areas under its control it’s clear that conditions are not conducive for sustained and voluntary returns, and that the time is still not right for the international community to support reconstruction efforts in regime-held areas of Syria absent irreversible steps toward a political solution to the conflict.

Mr. President, we’re also concerned about the rise in IDPs fleeing the last grip of ISIS as it tries to cling to territory in the Middle Euphrates River Valley. We thank our partners, who continue to provide additional shelter, medical care, and crucial food assistance to address the needs of IDPs in places like al-Hol and across northeast Syria. We also welcome the recent announcement from Prime Minister Mahdi that the Government of Iraq is prepared to help facilitate the repatriation of Iraqi nationals in Syria.

The United States will continue to work with our Coalition partners on stabilization efforts in northeast Syria to prevent the return of ISIS now that ISIS territorial control has collapsed.

Finally, on the situation in Idlib, Mr. President, the United States is concerned by the recent increase in regime shelling of Idlib province that has spurred the movement of an estimated 20 thousand people toward the Turkish border. The U.S. reiterates its calls on all parties to uphold the Turkish-Russian brokered ceasefire in order to prevent a dangerous escalation of the conflict and a humanitarian catastrophe. The ceasefire is vital to protecting three million civilians and to protecting the border of our NATO ally, Turkey.

I thank you, Mr. President.