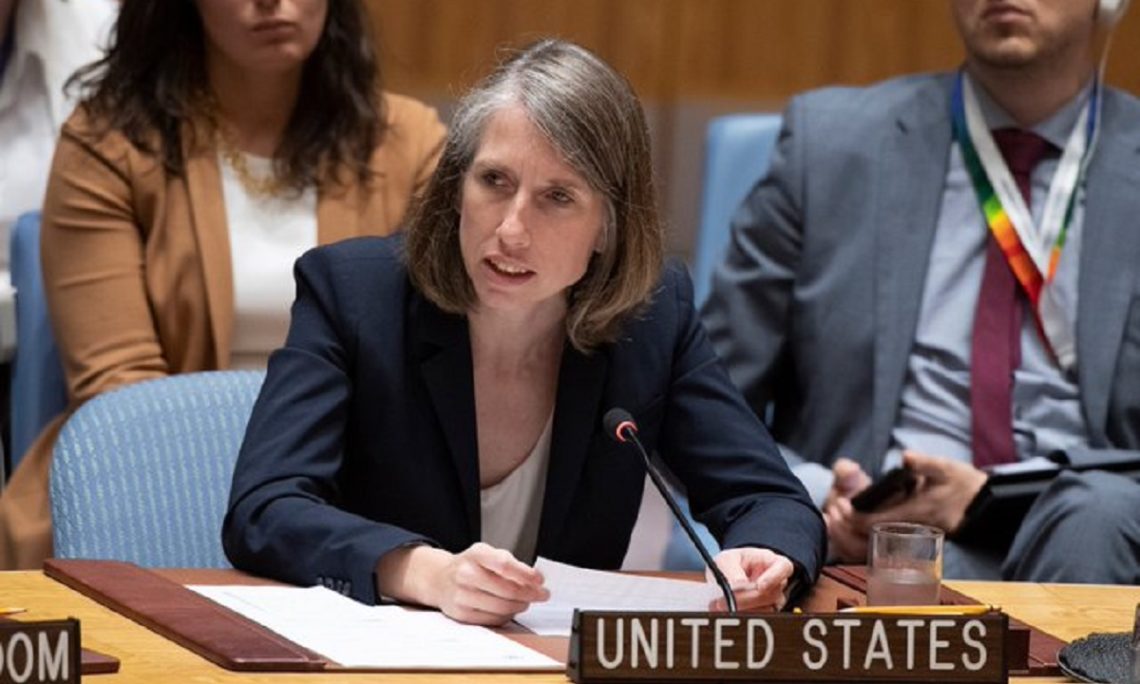 The United States condemns in the strongest possible terms the escalation of the Assad regime and the Russian Federation’s military operations in northwest Syria which have had a devastating impact on Syrian civilians, medical workers, humanitarians, and civilian infrastructure with an increasingly deadly air and ground assault.

There is no denying that the humanitarian situation in Syria is growing more dangerous by the day. The number of civilians killed and injured is rising; water facilities, schools, and hospitals are targeted by regime and Russian forces, despite the fact that the coordinates of these locations are shared with the Russian Federation through the UN’s deconfliction mechanism, specifically to prevent them from being hit.

We have just heard devastating statistics from the Under-Secretary-General Lowcock and Ms. Sirkin, reminding us all of the grim facts on the ground that should compel us all to put an immediate end to this violence. Over four hundred and forty thousand people have already been internally displaced since the start of the offensive in April, and the grim reality is that there is simply nowhere else for the over three and a half million people in Idlib province to run to escape the next air strike—and this fact is well known to the Assad regime and the Russian Air Force.

Mr. President, for the past three months the United States has called on the Assad regime and the Russian Federation to immediately stop their military campaign and their attacks on civilians and cease military operations in Idlib consistent with the Sochi Agreement signed by Turkey and the Russian Federation last year. Similar calls from other Council partners and dire warnings from Under Secretary-General Lowcock and other senior UN officials— that an offensive in Idlib would unleash the worst humanitarian crisis in Syria to date have all gone unheeded and ignored by Damascus and Moscow.

On July 22, the United States heard with utter revulsion reports of yet more airstrikes by the Assad regime and Russian Air Force in the city of Maarat Al Numan in Idlib against a market, that killed at least 35 people and left little but rubble behind.

Mr. President, it is important that we be clear about the facts about the violence in Idlib and northern Hama. Russia and the Assad regime are devastating civilian infrastructure and hitting medical facilities. As the U.N. High Commissioner for Human Rights said in a July 26 statement, “These are civilian objects, and it seems highly unlikely, given the persistent pattern of such attacks, that they are all being hit by accident.”

Indeed, when the Assad regime and Russia repeatedly attacks hospitals and other civilian objects—many of which these parties have been informed of in advance are sheltering vulnerable civilians, it is difficult to deny that this sustained pattern of strikes on markets, hospitals, and bakeries is anything but a deliberate act.

The United States also condemns the killing and maiming of humanitarian actors, such as ambulance drivers, health workers, and White Helmet volunteers by the Assad regime and its allies’ campaign.

The United States will not waiver in our support for the courageous work the White Helmets and all medical workers and humanitarians do in Syria every day. Doctors, nurses, ambulance drivers, White Helmets are not terrorists and deserve our protection. The United States offers its condolences to the families, friends, and colleagues of the three ambulance workers killed over the weekend and the four White Helmet volunteers – Amir al Bunni, Anas al Dyab, Mahmoud al-Ali, and Zuhair Al-Rajou — recently killed as they attempted to save victims of the airstrikes.

The United States forcefully condemns these devastating impacts on civilians in the strongest possible terms and calls for an immediate end to ongoing hostilities. We urge the Assad regime and its allies to immediately return to a ceasefire in the area, and allow for unhindered access to address the humanitarian disaster created by the airstrikes, as outlined in 2254 and numerous Security Council Resolutions.

Mr. President, we have said it before and must say it again—there is no military solution to this conflict. This latest offensive on Idlib has gained the regime and its allies nothing, and only served to further escalate and destabilize the region.

We appreciate the participation of Sussanah Sirkin from Physicians for Human rights in today’s briefing. Mr. President, accountability cannot be optional for the perpetrators of violence in Syria, and in particular the regime’s latest attacks which have hit known health facilities.

The United States fully supports a full and independent investigation into attacks which have hit health facilities in northwest Syria, and also continues to encourage UN humanitarian agencies to provide any data and information they have on reported attacks on health facilities to the UN Commission of Inquiry and the “Triple I-M” (IIIM) for further action and to ensure these actions are appropriately documented.

The United States is also deeply concerned by UN reports that the military operations in northwest Syria are impeding the delivery of humanitarian aid to the three million civilians in Idlib province. These communities are deeply dependent on UN-cross border aid.

The United States calls on all Security Council members, as well as our regional partners, to ensure that the UN has the ability to freely implement cross-border aid deliveries throughout all agreed border crossings in accordance with UN Security Council Resolution 2449. There is no substitute for the UN’s cross-border operations through all four authorized border crossings in resolution 2449, and it is particularly important now that we are witnessing a deteriorating humanitarian situation in southern Syria.

Mr. President, the United States also remains gravely concerned about the fate of the thousands of civilians in Rukban. Though as many as seventeen thousand people, according to UN estimates, have voluntary left the camp, as many as twenty-four thousand people remain in the camp and have systematically been denied aid because of bureaucratic delays by the regime and the Russian Federation since the last UN convoy reach the camp in February.

The United States also strongly urges the Russian Federation, on behalf of the Assad regime, to expedite and secure all necessary regime approvals for a new UN assessment team and aid convoy to Rukban immediately.

The United States affirms the right of the internally displaced persons in Rukban to make their decisions to leave the camp voluntarily. However, it is important to recall that many who remain in Rukban are choosing to stay in the most difficult of humanitarian conditions because they either cannot afford to pay for their own transportation out of the camp or, as was noted in the UN’s February assessment, some residents do not wish to return to areas under control of the Assad regime out of fear of reprisal attacks, forced conscriptions despite Russian-brokered deals to the contrary, and arbitrary detentions.

Mr. President, the plight of Syrian civilians arbitrarily detained by the Assad regime is one humanitarian issue that is often overshadowed by the barbarity of the Assad’s military campaign in broad daylight, the continued forced starvation siege of Rukban, and continued restrictions on UN access.

There is both a humanitarian and a political imperative for advancing progress on improving transparency and access to regime prisons, and securing the release of those Syrians arbitrarily detained by the regime, especially women, children, and the elderly.

Progress on detainee issues, as Special Envoy Geir Pedersen has said, could be a confidence building measure to generate trust between the Syrian people, the Syrian opposition representatives, and the Assad regime that will help create momentum toward a political solution.

Therefore, Mr. President, the United States intends to call for a UN Security Council briefing on the topic of detainees and missing persons in Syria in the coming weeks to mobilize the need for urgent action to be taken to address this issue.

Finally, the re-invigoration of the political process in line with UN Security Council Resolution 2254 must start with a verifiable ceasefire across all of Syria, and in particular, Idlib and northern Hama. Until then, the United States will continue to apply pressure through all available means to isolate the regime and its allies.