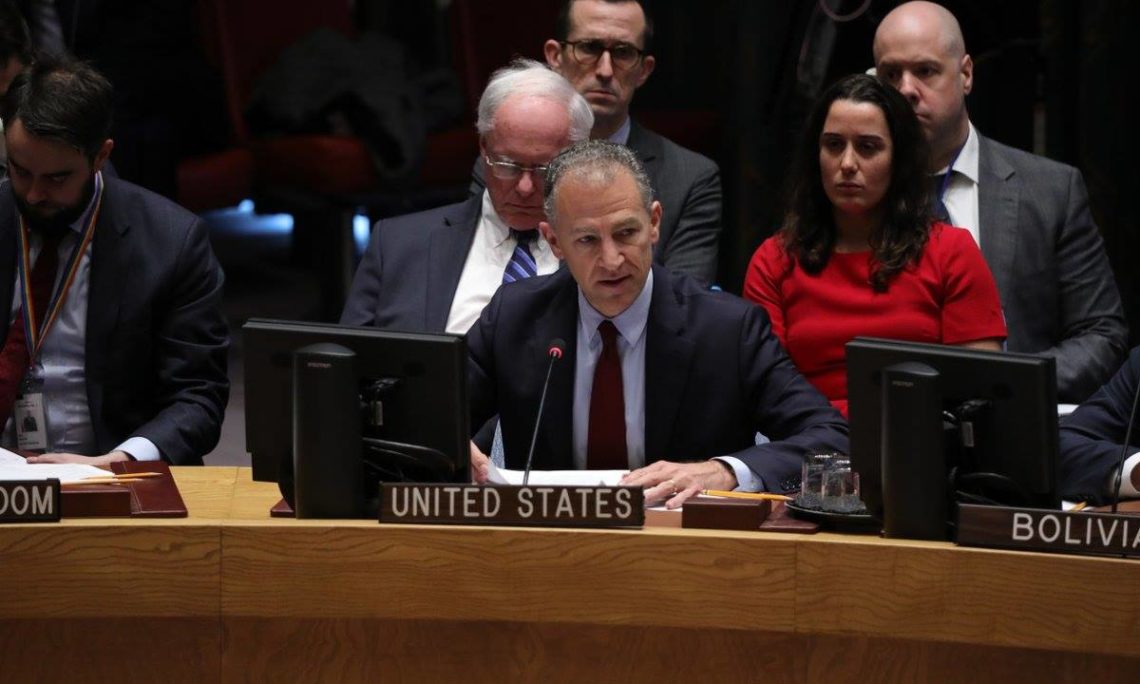 Thank you Mr. President and thanks to Undersecretaries General DiCarlo and Lowcock for their deeply concerning briefings today. Mr. President, the United States believes the September 2018 ceasefire agreement between the Russian Federation and Turkey in Idlib and neighboring areas is absolutely essential to maintain international peace and security. Millions of civilian lives are in jeopardy due to increased hostilities by Russia and the regime over the past two weeks in the Idlib and Hama governorates. These intensified military operations continue to destabilize the region.

The escalation has killed or injured at least 100 people and driven over 180,000 people from their homes as we have heard– some for the third or fourth time in eight years of war – fleeing the Assad regime’s barrel bombs and Russian and regime airstrikes. Recent fighting has forced civilians to seek safety closer to the border of our NATO ally, Turkey, and the new wave of displaced persons has overwhelmed the capacity of IDP camps in the area. The offensive has put aid workers and humanitarian facilities in danger. Turkish military forces on the ground to monitor and implement the ceasefire agreement are also in danger, some already being injured as we have heard.

For a year, the UN and many in this Council has issued grave warnings about the scope of the tragedy that would result from a military offensive in Idlib. The Secretary-General was crystal clear in September 2018, when he said that a military assault on Idlib would unleash “a humanitarian nightmare unlike any seen in the blood-soaked Syrian conflict.” Undersecretary General Lowcock has been equally clear about the scale of the humanitarian catastrophe as a result of a military assault in Idlib.

The Russian Federation, on behalf of the Astana Group, has assured the Security Council — as well as my country bilaterally at the highest levels — that they are committed to maintaining their own ceasefire. However, Russia and the regime justify their attacks on civilians and hospitals as “counterterrorism.” The strikes have destroyed 18 health facilities. Most alarming is the fact that several of these facilities were on de-confliction lists set up by the Russian Federation and OCHA.

Mr. President, the Syrian people are in grave risk of a catastrophic humanitarian crisis if Russia and the Assad regime do not immediately halt their escalation and immediately recommit to the ceasefire. The United States reiterates that any escalation in violence in northwest Syria would destabilize the region and we call on the Russian Federation to take the following steps with immediate effect in recognition of its ability to influence the behavior of the Assad regime:

The United States strongly supports Turkey’s efforts to de-escalate the situation and preserve the Sochi ceasefire agreement. The United States is not alone in its calls for Russia and the regime to live up to their commitments to maintain the ceasefire. We echo the important statement by the Turkish Foreign Minister this week calling on the regime to stop its military aggression in Idlib as well as similar calls by our European partners.

The United States’ resolve to hold the Assad regime accountable for any further use of chemical weapons is unwavering, and we remind the regime and its allies that any use of chemical weapons, including chlorine gas, will be met by a strong, swift response. Mr. President, Russia’s involvement in this offensive is deeply concerning because the violence threatens the opportunity we believe has arisen in recent days, thanks to the UN Special Envoy Geir Pedersen’s diplomatic push, to jump-start the political process through the creation of a constitutional committee.

The Assad regime’s May 6 announcement of a ground offensive is incompatible with the Special Envoy’s goal to achieve a political solution to the conflict. The United States fully supports Special Envoy Pedersen’s efforts to form the constitutional committee as soon as possible. With agreement on the constitutional committee within reach, Russia and the regime’s decision to launch airstrikes, fire heavy artillery and barrel bombs sends a terrible signal of disregard towards the UN political process.

Today, we want to send a clear signal to the Assad regime and its supporters, Russia and Iran, that there is no military solution to the Syrian conflict. The only solution is a political transition as outlined in resolution 2254: namely, a ceasefire; the establishment of credible, inclusive, non-sectarian governance that respects the rights of the Syrian people; constitutional revision; and free and fair elections, pursuant to the new constitution, supervised by the UN with the participation of all Syrians, including members of the diaspora.

Russia has repeatedly claimed to agree that there is no military solution to the conflict in Syria. A peaceful and lasting political resolution of this crisis must begin with protection of civilian populations from violence. The United States is thus concerned that the recent military escalation may be an attempt by the Assad regime to stall formation of the constitutional committee and the UN-led political process and undercut pragmatic efforts to make progress on a trajectory to the political resolution of the conflict. This is precisely the wrong course to pursue.

Finally, Mr. President, I have outlined what is the only solution to the conflict endorsed by the international community and every single member of the UN Security Council. The United States remains firmly committed to UN Special Envoy Geir Pedersen’s efforts on the UN-led political process in Geneva and to UN Security Council resolution 2254.

Millions of lives depend on it. I thank you.