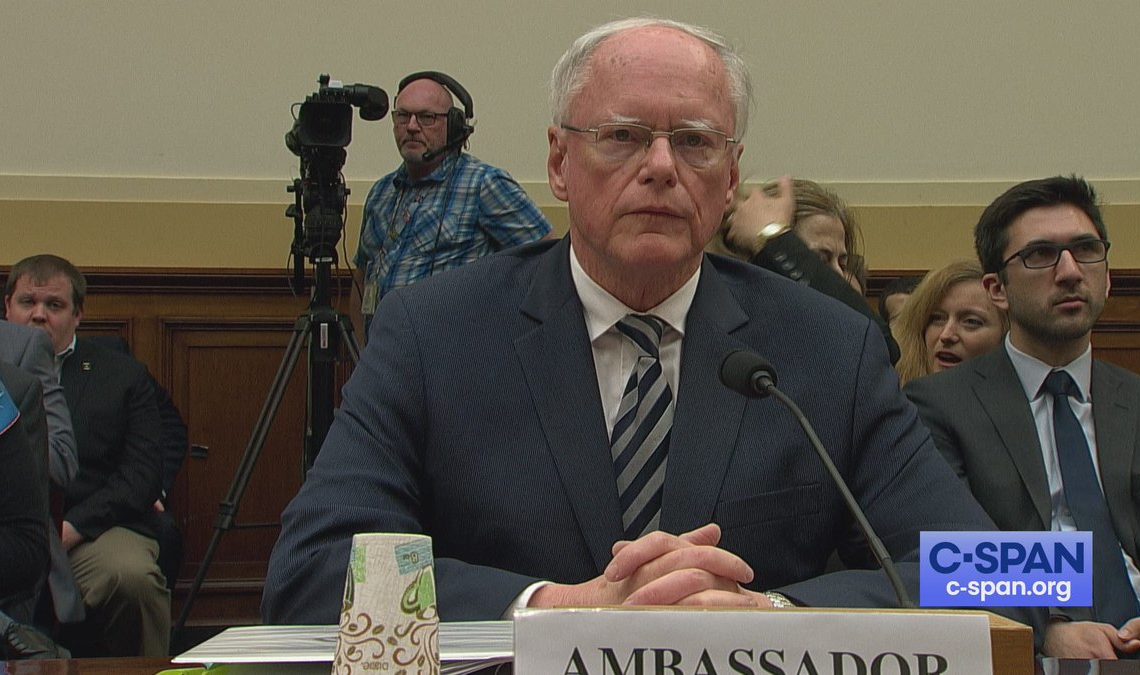 Testimony
Before the House Foreign Affairs Committee
Statement of Ambassador James F. Jeffrey
Special Representative for Syria Engagement and Special Envoy to the Global Coalition to Defeat ISIS
May 22, 2019

Chairman Engel, Ranking Member McCaul, distinguished Members of the Committee, thank you for inviting me to testify. Chairman Engel, Ranking Member McCaul, I want to thank you for your committee’s close attention to this issue. Last November I testified before the Middle East and North Africa Subcommittee and I’m honored to have the opportunity to be here before the Full Committee today. Our tactics have evolved over the course of the past months, but we remain steadfast in our resolve to pursue the strategic goals in Syria I outlined last time.

The Syrian conflict has raged for over eight years, fueled by the Bashar al- Assad regime’s despotic and barbaric treatment of its own citizens, Russia’s enabling of Assad’s brutality, and Iran’s malign influence in the region. The Syrian civil war has driven over half of Syria’s prewar population of approximately 20 million people from their homes, killed more than half a million men, women, and children, and witnessed repeated use of horrific chemical weapons—despite Syria’s obligations under Security Council resolution 2118 and the Chemical Weapons Convention. Russia has also failed to uphold its pledge to act as guarantor of the regime’s compliance with the 2013 Geneva deal on the elimination of Syrian chemical weapons. The regime continues to devastate its own country and oppresses its citizens. An end to the conflict should achieve justice and accountability for the Syrian people, including by addressing the regime’s brutal and systematic efforts to silence Syrian calls for reform by killing, torturing, and detaining ordinary citizens.

As described in the Administration’s classified Syria strategy paper provided to Congress in February, 2019, the Administration is pursuing three mutually reinforcing whole-of-government strategic objectives in Syria – the enduring defeat of ISIS, the removal of all Iranian-led forces from Syria, and the resolution of the Syrian crisis through a political solution in line with United Nations Security Council Resolution (UNSCR) 2254.

In March, the Global Coalition to Defeat ISIS achieved an important victory with the territorial defeat of ISIS. We are inspired by the battlefield success of our own service men and women, and those of our partner forces on the ground – primarily the Syrian Democratic Forces (SDF). One hundred per cent of the territory ISIS held, more than 40,000 square miles in Iraq and Syria, has been liberated from ISIS control. This critical milestone represents a crushing strategic and psychological blow to ISIS, gives millions of innocent civilians a brighter future, and underscores the unwavering commitment of our local partners and our partners in the Coalition. However, the fight is not over and we understand our work is far from complete. As the D-ISIS campaign in northeast Syria transitions from liberating territory to rooting out the remaining ISIS presence and preventing an ISIS resurgence, we will work with our partners and allies to enable critical stabilization efforts and assist the humanitarian needs of displaced Syrians unable to return home in a safe manner.

ISIS remains a significant threat to the United States, to the region, and our allies and partners. We saw this in the horrific Easter attacks in Sri Lanka, which have been linked to ISIS. We continue to pursue the enduring defeat of ISIS especially denying it safe haven . The President has been clear that the defeat of ISIS is one of the Administration’s top priorities.

On February 21 President Trump announced that a limited number of U.S. Armed Forces will remain in northeast Syria as part of the continued Coalition mission to ensure the enduring defeat of ISIS. This is in addition to our continued presence at Al Tanf Garrison in southern Syria. The presence of these forces will help to continue operations against ISIS, prevent an ISIS resurgence and maintain stability in Syria – both of which are critical to the security of our regional and global allies, and especially to U.S. national security.

The Iranian regime’s malign behavior has left us no choice but to pursue the withdrawal of all Iranian-commanded forces from the entirety of Syria. Iran’s reckless behavior makes the situation in Syria more dangerous, and the vast majority of the international community agrees. Iranian-backed forces use bases inside Syria to participate in violence again the Syrian people and launch attacks against Israel. Iran and its proxies threaten U.S. national security by sowing instability in the region that exacerbates tensions between communities and provides space for terrorist groups to thrive.

The United States and our allies have talked to Russia about a path toward a Syrian political solution many times, including the meeting I attended with Secretary Pompeo in Sochi earlier this month. Despite our differences, we believe Russia’s own interests are not served by a murderous Syrian regime rejected by its people and the international community or by Iranian power projected into Syria as a platform. Instead, the United States and Russia have a shared interest in a secure and stable Syria, one with normal relations with its neighbors and the outside world – a Syria in which foreign forces not there before the conflict are no longer present. If Russia wants to achieve such an outcome, it should join efforts to counter Iran’s destabilizing actions and malign influence in Syria. Specifically, to use its influence with the Assad regime to bring about the removal of all Iranian-commanded forces from the country.

During our most recent trip to Russia with Secretary Pompeo we approached the Russians in a spirit of pragmatism. I returned with a sense of possibilities. Russia indicated it was willing in principle to achieve all of our goals, a political process under UNSCR 2254 reaching agreement on constitutional revision, free and fair UN-managed national elections, and governance that serves the Syrian people, encourages the return of refugees and internally displaced persons , and meets Security Council demands the Russians have committed to in order to deescalate the conflict, citing Idlib.

Despite the recent tragic offensive there, Moscow has reconfirmed, at least on paper, their commitment the ceasefire deal with the Turks. Russia also agrees in principle with withdrawal of foreign forces, including Iranian forces. It took initial measures to this end in southwest Syria in 2018. Unfortunately, Iranian-commanded forces did not truly comply. In return, we have acknowledged that the U.S. and our partners would gradually return to a normal relationship with a reformed Syrian government that honors the will of the Syrian people, but only in response to verified steps required by our sanctions and our other policies.

As the Committee knows, I have worked closely with my Turkish counterparts balancing their legitimate security concerns while working towards the defeat of ISIS. I was in Ankara earlier this month, to negotiate an arrangement regarding a so-called safe zone in northeast Syria in an effort to de-escalate any potential for violence. That diplomatic effort continues apace as we continue to focus on finding solutions.

We are seized with the situation in Idlib province, home to more than three million persons. Recent Syrian regime barrel bombs and Russian and Syrian airstrikes have killed scores; destroyed medical facilities, schools, and residences; and displaced more than 180,000 people. We also remain vigilant against any Assad regime renewed use of chemical weapons in Idlib. The United States will not tolerate the use of these heinous weapons by anyone, anywhere. If the regime uses chemical weapons again, the United States and our allies will respond quickly and appropriately. We are repeating the message President Trump gave in September concerning Idlib– that such assaults are a reckless escalation. We will employ all of our tools of national and allied power to prevent a crisis that would result in further humanitarian disaster threatening hundreds of thousands, as well as Turkey’s security along its border.

Our focus going forward is to continue efforts to de-escalate the violence, with a focus right now on Idlib, and to reinvigorate a UN-led political process to end the Syrian conflict. We have committed significant United States resources into mitigating the suffering in this conflict, providing more than 9.5 billion dollars of humanitarian aid since the start of the conflict. We have also strongly committed resources to the fight against ISIS, where we have led the Global Coalition’s military effort in Syria – operating by, with, and through our local partners on the ground. That military effort has been supplemented by hundreds of millions of international donations toward stabilizing areas freed from ISIS to prevent the return of that horrific terror group. For example, the Global Coalition has contributed more than $100 million to explosive remnants of war clearance since 2017, clearing more than 25,500 explosive hazards and since April 2018.

Finding a solution in Syria will not only bring a close to this bloody chapter in the country’s history and allow for refugees and internally displaced persons to finally choose to return home voluntarily, safely, and with dignity, but is part of the Administration’s broader Middle East strategy. A political solution in Syria will help to decrease Iran’s malign influence, end the regime’s sponsorship of terrorism and the power vacuum that allows it to flourish, increase the security of our partners and allies, and end the barbaric use of chemical weapons by one of the few regimes that still uses them against its own people.