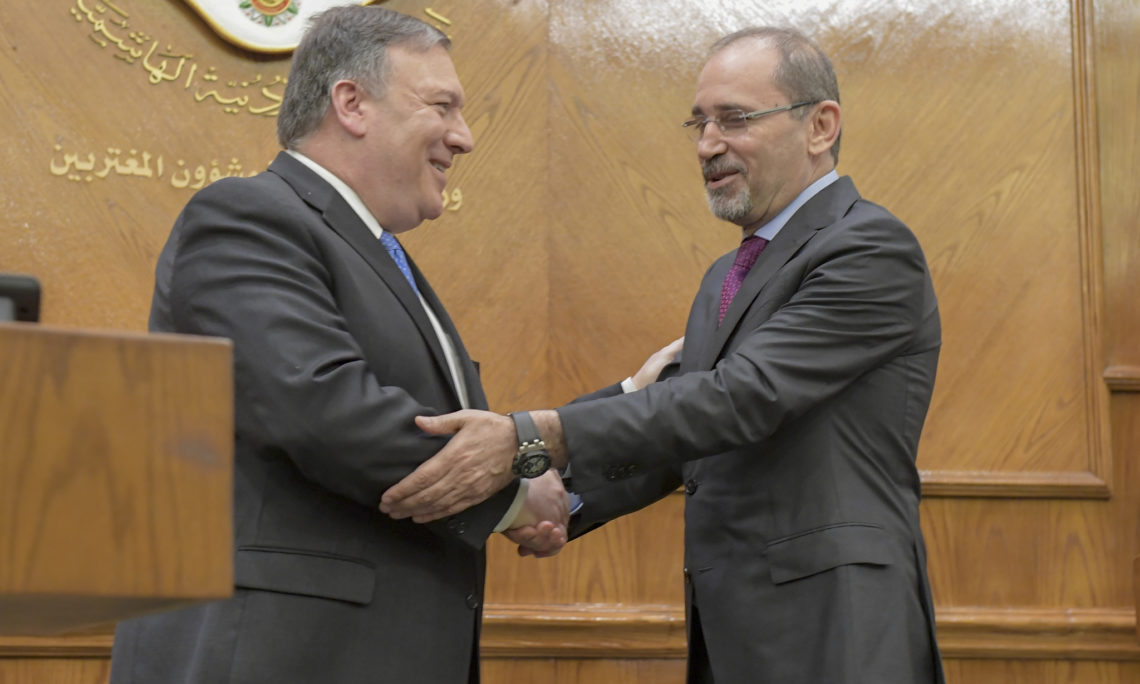 FOREIGN MINISTER SAFADI: It is a great pleasure to welcome you here in Jordan. You are no stranger to Amman; you’ve been here many, many times before. And I think you know firsthand how strong and how solid our friendship and our partnership is. And your visiting with us so early into your assumption in your responsibilities as Secretary of State is yet another sign of how valuable that partnership and how solid that friendship is.

I look forward to continue to working with you, sir, on building our relationship, strengthening our bilateral ties, but also strengthening our partnership, which has done a lot of good at bad times for the causes of peace, stability, and security that we pursue as common objectives. So you are here as a friend and (inaudible).

Our partnership is one in pursuit of peace and stability, as I said. We value that, and we also value the tremendous support that the United States has continued to give Jordan throughout the years. The new MOU which we just recently signed, the first under President Trump and the largest ever to Jordan, is extremely important to our efforts to carry out our necessary economic reforms and to enable us to meet our defense (inaudible). For that again we thank you, sir.

Our talks today offered a tremendous opportunity to go over an array of issues, many of the challenges that we face. Again, the conversation was focused on how we can continue to work together to bring about peace and stability to the region and we will continue to coordinate and cooperate as we try to resolve many of the conflicts and crises that have denied peoples of the region the peace and stability and opportunity that they deserve. Key to that, as you know, for us in Jordan is the Palestinian-Israeli conflict. This is, we believe, the main cause of instability in the region, and its resolution is the key to achieving the lasting and comprehensive peace that we want. The two-state solution remains the only path to that peace, as we believe in Jordan, and it is the solution that would allow for the emergence of an independent, sovereign Palestine state with East Jerusalem as its capital in the lines of June 4, 1967. There is a deadlock in these efforts now, and we know that the status quo cannot be maintained. We have a difficult situation but the challenge is always to make sure that this difficult situation does not get worse. We in Jordan are committed to doing everything we can in cooperation with our partner in the U.S. and others in the international community to make sure that we create political horizons and move towards achieving that solution.

Yes, that – the two-state solution is being challenged. Yes, there are many obstacles. But I think what is – what is the alternative? We cannot give up in our efforts to achieve peace, nor can we say that there is any viable alternative that we can sustain.

The Secretary and I are also in agreement on Syria. We need a political solution that will preserve the integrity and sovereignty of the Syrian – of Syria and a solution that will be acceptable to the Syrian people. We believe Geneva is the path to achieve that solution on the basis of 2254. The de-escalation zone in the south is an example of U.S., Jordanian, and Russian cooperation. That zone has saved a lot of lives, has prevented against further destruction, has prevented against new waves of refugees, and we in Jordan are hosts to over 1.3 million Syrians, so that is a tremendous pressure that we have. And that zone has helped mitigate all those risks. We, again, are continuing to preserve that zone and work towards a peaceful solution to Syria and that zone and that deal (inaudible) political – ultimate political solution to the Syrian crisis.

The challenges are enormous and they continue to be so, and this is the Middle East, and there’s never a dull moment, as they say. But with friends like you, sir, we know that we will continue to be able to tackle them, and I – and we look forward in Jordan to working with you on achieving the peace and stability that this region wants. And again, I welcome you here and I look forward to many further meetings. Thank you, sir.

SECRETARY POMPEO: Thanks for the kind words, Foreign Minister Safadi. It’s wonderful to be here. Thank you for the incredibly warm welcome I received here today. I’m thrilled to be here in Jordan on my very first trip as Secretary of State. I told the foreign minister that I came here before I went to my office. So I’m kind of on my way to work. (Laughter.)

I came here to signal how important Jordan is to the United States. Our partnership is essential to both countries, our friendship between America and His Majesty King Abdullah, and I wanted to come here also to reaffirm all of those ties. This is indispensable to our two nations and I think to the region as well.

As President Trump said when he welcomed King Abdullah to the White House, we are deeply committed to preserving our strong relationship and to strengthening America’s longstanding support for Jordan. Support for Jordan’s security and stability is an important national interest of the United States. We want the Jordanian people to know this. We want you to know that our commitment to your country is firm. The United States is the single largest donor of economic, security, and humanitarian assistance to Jordan. We’re quite proud of that. We think it’s the right thing to do.

In February, the United States and Jordan signed a new five-year MOU in which we committed to provide over $6.3 billion in bilateral foreign assistance to Jordan over the next five years. This increase comes at a time when Jordan is facing an adverse impact of conflict on its border. The conflict raging in Syria remains a threat to Jordanian peace and security. We’ll continue to work with Jordan to help the Kingdom defend its borders, always. We must not let Syria again become a safe haven for ISIS or for any other terrorist group.

The United States goals for Syria are clear: defeat ISIS; ensure the safe delivery of humanitarian aid; de-escalate the violence – something we spoke about at some length this morning; deter the use of chemical weapons; and ultimately, support a political resolution to the conflict. We remain fully committed to the ceasefire arrangement in southwest Syria. The United States strongly supports the UN efforts in Geneva to end this conflict which has gone on for far too many years.

Throughout the Syrian crisis, Jordan has provided an extraordinary level of assistance to the Syrian people. Thank you so much. We know it’s costly and we know it’s difficult, but your leadership of your neighbors at this incredibly challenging time is extraordinary. The United States, too, has helped Jordan manage this refugee influx, providing nearly $1.1 billion in humanitarian aid to Jordan since the start of the conflict in Syria.

Turning to Middle East peace, when the President announced that the United States would recognize Jerusalem as the capital of Israel, he also announced that the United States is not taking a position on boundaries or borders, and will support a two-state solution if the parties agree to it. The specific boundaries of Israel’s sovereignty in Jerusalem remain subject to negotiation between those parties. The United States continues to support the status quo with regard to the Haram al-Sharif/Temple Mount, and as Vice President Pence reaffirmed just in January here in Amman, we are committed to continuing to respect Jordan’s special role as the custodian of those holy sites in Jerusalem. We will continue to work for peace in the great hope of offering the best outcome for both the Israeli and Palestinian people.

Finally, both of our countries know the threat that Iran poses to the region. This morning we had a chance to discuss how best to counter Iran’s malign influence and activity in the region, and with all of our allies we’ve had discussions with respect to the JCPOA.

We will continue to work together to support bilateral ties between the United States and Jordan. We’re going to make progress on these key regional issues. And we will move forward to ensure a stable and safe Middle East with Jordan as our ally and partner.

Thank you for hosting me here in Jordan today. It’s been a pleasure.

MODERATOR: We will take a few questions.

SECRETARY POMPEO: So the foreign minister and I did have a long discussion about this. Our – we are together jointly in perfect accord with respect to how to proceed with the objectives in Syria. It is a Geneva-based process led by the UN to achieve a political resolution to continue to de-escalate the conflict so that we can begin to resolve all of the various political challenges that are faced there.

You asked in particular about our – the strikes that were undertaken by the United States and the French. It is the case that the use of chemical weapons is special and unique, and President Trump has made very, very clear that this is intolerable; it presents enormous risk to the world if we don’t re-establish a deterrence framework for the use of chemicals in combat.

QUESTION: Minister and Mr. Secretary, thank you for taking our questions. Secretary Pompeo, in the past four weeks since the Palestinians began protesting in Gaza, 45 Palestinians have been killed by Israeli security forces. Do you have any concerns that excessive force was used? Do you agree with your colleague here that the Israeli-Palestinian conflict is the most serious threat to stability in the region? And do you think that the two-state solution is the only way that it can be resolved, as your colleague seems to?

SECRETARY POMPEO: So let me try and take the three questions there and try to take them in reverse – reverse chronological order. With respect to the two-state solution, the parties will ultimately make the decision about what the right resolution is. We’re certainly open to a two-party solution. That’s a likely outcome. We certainly believe that the Israelis and Palestinians need to have political engagement. We urge the Palestinians to return to that political dialogue.

Second, it is an important piece of achieving Middle East stability is to resolve this conflict. So precisely how to rank it amongst all the various challenges – I’ll defer on that. Know that it is an incredible priority for the United States to provide whatever assistance we can to allow the two parties to come to a resolution of this incredibly longstanding and important conflict.

Then your first question is about the activities in Gaza over the past days and weeks. We do believe the Israelis have the right to defend themselves, and we’re fully supportive of that.

SECRETARY POMPEO: So two questions. The deal-of-the-century question. We understand that ultimately this deal will be agreed to between the Israelis and the Palestinians, but certainly it’s the case that as America continues to be involved in facilitating such an arrangement, we’re doing so in close alignment with Jordan and the Jordanian people so that we’re working together so that the solution that is ultimately achieved works for those two countries and for the greater region as well, including the important interest that Jordan has in that.

With respect to Syria, I think we’ve talked about this. We believe there are many countries, including the United States, that will play an important political role in achieving the de-escalation and the ultimate political resolution in Syria.