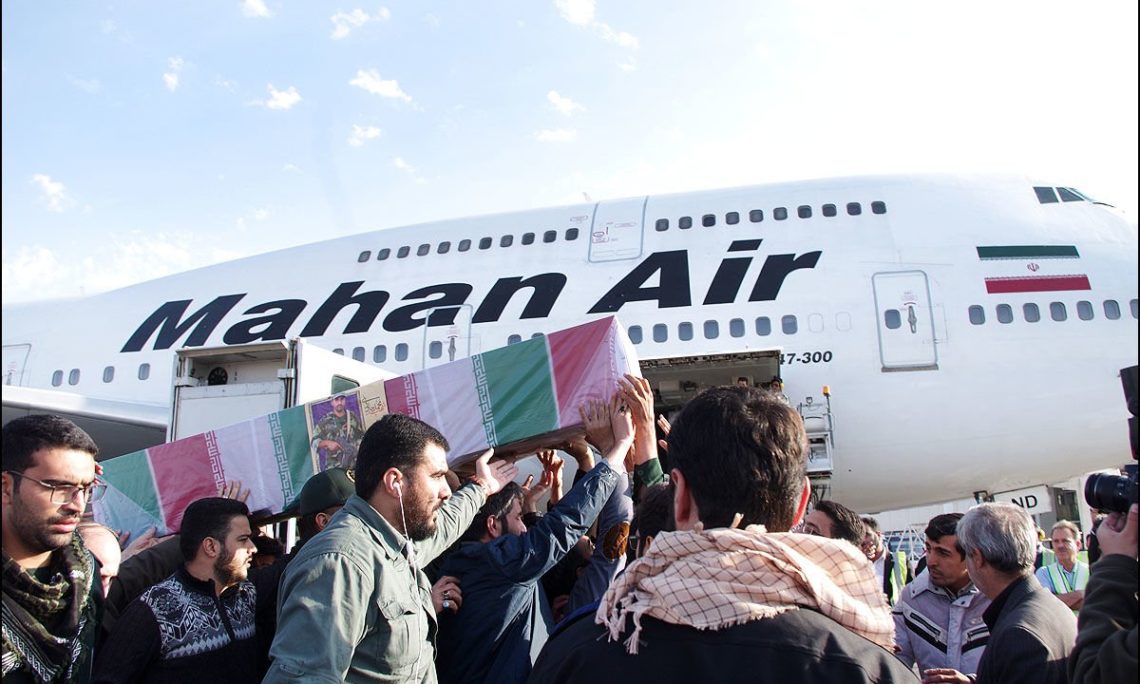 WASHINGTON – Today, the U.S. Department of the Treasury’s Office of Foreign Assets Control (OFAC) took action against two Syria-based, Iran-backed militias composed of foreign nationals, an Iranian airline linked to designated Iranian airline Mahan Air and Iran’s Islamic Revolutionary Guard Corps-Qods Force (IRGC-QF), and an Armenian general sales agent (GSA) providing services to Mahan Air.  The Fatemiyoun Division, composed of Afghan nationals, and the Zaynabiyoun Brigade, consisting of Pakistani nationals, are IRGC-QF-led, Syria-based militias whose fighters are recruited by the Islamic Revolutionary Guard Corps (IRGC) and its Basij militia mostly from Afghan and Pakistani refugees and migrants residing in Iran.  On October 16, 2018, OFAC designated the Basij militia, along with its vast network of 20 corporations and financial institutions, for recruiting fighters, including child soldiers, for the IRGC-QF’s operations in Syria.

The Fatemiyoun Division and Zaynabiyoun Brigade are being designated for providing material support to the IRGC-QF.  OFAC is designating Qeshm Fars Air for being owned or controlled by Mahan Air, and for providing material support to the IRGC-QF, and Armenia-based Flight Travel LLC for acting for or on behalf of Mahan Air.  Mahan Air plays an integral role supporting the IRGC-QF and its proxies in Syria by transporting personnel and weapons.

“The brutal Iranian regime exploits refugee communities in Iran, deprives them of access to basic services such as education, and uses them as human shields for the Syrian conflict,” said Treasury Secretary Steven Mnuchin.  “Treasury’s targeting of Iran-backed militias and other foreign proxies is part of our ongoing pressure campaign to shut down the illicit networks the regime uses to export terrorism and unrest across the globe.”

“This is a regime that preys on the most vulnerable — coercing children as young as 14 years old to fight in Syria under the direction of the IRGC-QF, and perpetuating widespread suffering and displacement,” said Under Secretary for Terrorism and Financial Intelligence Sigal Mandelker.  “Iran continues to leverage Mahan Air and its commercial aviation sector to transport individuals and weapons needed to carry out this tragic campaign and to fuel sectarian conflict throughout the region.  We are aggressively targeting those who continue to provide commercial support to Mahan Air and other designated airlines, and any who fail to heed our warnings expose themselves to severe sanctions risk.”

The Fatemiyoun Division, Zaynabiyoun Brigade, Qeshm Fars Air, and Flight Travel LLC are being designated under Executive Order (E.O.) 13224, a counter-terrorism authority.  Additionally, the IRGC-QF, the Fatemiyoun Division, and the Zaynabiyoun Brigade are also being designated under E.O. 13553, an authority that targets serious human rights abuses by the Government of Iran.

FATEMIYOUN AND ZAYNABIYOUN: IRGC-QF-LED MILITIAS PREYING ON AFGHAN AND PAKISTANI REFUGEES AND MIGRANTS, INCLUDING CHILDREN

The Fatemiyoun Division is an IRGC-QF-led militia that preys on the millions of undocumented Afghan migrants and refugees in Iran, coercing them to fight in Syria under threat of arrest or deportation.  Several hundred Fatemiyoun Division fighters, including children as young as 14 years old, have died fighting Iran’s war in Syria, and the bodies of slain Afghan fighters have been flown back to Iran on board Mahan Air flights from Syria.

In addition to transporting weapons and fighters for the IRGC-QF, Mahan Air has been used by the IRGC to transport bodies of Fatemiyoun Division fighters who are killed fighting in Syria back to several airports in Iran (Pictures obtain from Iran’s Mashregh News and Quds Online).

Many Afghans from Iran have joined the wave of refugees arriving in Europe, including a number who have fled the IRGC’s forced recruitment.  Former Fatemiyoun Division fighters have reported being arrested by Iranian security forces and offered a choice between prison, deportation, or “volunteering” to train and fight in Syria with the promise of legal residency.  Afghan recruits receive little training prior to deployment to Syria, where many are thrust into dangerous front-line combat roles, resulting in significant casualties.  The Zaynabiyoun Brigade is another Syria-based, IRGC-QF-led militia, composed of Pakistani fighters mainly recruited from among undocumented and impoverished Pakistani Shiite immigrants living in Iran.

The Fatemiyoun Division and Zaynabiyoun Brigade are being designated pursuant to E.O. 13224, which targets terrorists and those providing support to terrorists or acts of terrorism.  OFAC is designating the Fatemiyoun Division and Zaynabiyoun Brigade for assisting, sponsoring, or providing financial, material, or technological support for, or financial or other services to or in support of, the IRGC-QF.  The IRGC-QF was designated pursuant to E.O. 13224 on October 25, 2007.

As a part of today’s action, the IRGC-QF, the Fatemiyoun Division, and the Zaynabiyoun Brigade are also being designated pursuant to E.O. 13553, which targets serious human rights abuses by the Government of Iran.  The IRGC-QF is being designated for being owned or controlled by, or acting or purporting to act for or on behalf of, the IRGC, which was designated pursuant to E.O. 13553 in 2011 for engaging in serious human rights abuses, including the violent crackdowns on protesters in Iran in 2009.  The Fatemiyoun Division and the Zaynabiyoun Brigade are being designated pursuant to E.O. 13553 for having materially assisted, sponsored, or provided financial, materials, or technological support for, or goods or services to or in support of, the IRGC-QF.

Since the onset of the Syrian civil war, Iran has routinely relied upon Iranian airlines such as Mahan Air to fly fighters and materiel to Syria to prop up the Assad regime.  Mahan Air has transported IRGC-QF operatives, weapons, equipment, and funds abroad in support of the IRGC-QF’s destabilizing regional operations.  Mahan Air has also transported IRGC-QF Commander Qassem Soleimani, who is sanctioned under United Nations Security Council Resolution 2231 and therefore covered by a travel ban.

Qeshm Fars Air, which originally operated as a commercial airline between 2006 and 2013, restarted operations in 2017, and its fleet of two B747 aircraft have operated regular cargo flights to Damascus, delivering cargo, including weapons shipments, on behalf of the IRGC-QF.  Mahan Air employees fill Qeshm Fars Air management positions, and Mahan Air provides technical and operational support for Qeshm Fars Air, facilitating the airline’s illicit operations.  The delivery of lethal materiel by Qeshm Fars Air enables Iran’s military support for the Assad regime, prolonging the brutal conflict and the suffering of millions of Syrians, and has resulted in the displacement of millions across the region.

Qeshm Fars Air is being designated pursuant to E.O. 13224 for being owned or controlled by Mahan Air, as well as for assisting in, sponsoring, or providing financial, material or technological support for, or financial or other services to or in support of, the IRGC-QF.

OFAC is also identifying two B747 aircraft as property in which Qeshm Fars Air has an interest:  EP-FAA and EP-FAB.  These identifications serve to warn those who provide support to these aircraft that they could be exposed to U.S. sanctions.

Flight Travel LLC, located in Yerevan, Armenia is being designated pursuant to E.O. 13224 for acting for or on behalf of Mahan Air by serving as a Mahan Air GSA in Armenia.  A GSA is a third party that provides services to an airline under the airline’s brand, including sales and marketing, administrative services, and financial services.  Flight Travel LLC has refused to heed warnings about the risk of sanctions exposure due to commercial support to Mahan Air, and it is now the third company sanctioned by Treasury for acting for or on behalf of Mahan Air as a GSA in the last seven months.  In July 2018, OFAC designated a Malaysia-based Mahan Air GSA, and in September 2018, OFAC designated a Thailand-based Mahan Air GSA.

The designation of Flight Travel LLC demonstrates the U.S. Government’s commitment to denying foreign support for Mahan Air and other designated Iranian airlines, and reinforces multiple warnings to the aviation community of the sanctions risk for individuals and entities maintaining commercial relationships with these airlines.  In addition to GSA services such as reservation and ticketing services, the civil aviation industry should conduct due diligence for other potentially sanctionable activities that may arise when conducted for or on behalf of a designated person.  Sanctionable activities may include marketing services, procurement of aircraft parts and equipment, maintenance contracts, airline ground services, catering, interline transfer and codeshare agreements, and refueling contracts.

As a result of today’s action, all property and interests in property of these entities that are in the United States or in the possession or control of U.S. persons are blocked and must be reported to OFAC.  OFAC’s regulations generally prohibit all dealings by U.S. persons or within (or transiting) the United States that involve any property or interests in property of blocked or designated persons.

In addition, persons that engage in certain transactions with the entities designated today may themselves be exposed to designation.  Furthermore, any foreign financial institution that knowingly facilitates a significant transaction or provides significant financial services for any of the entities designated today could be subject to U.S. correspondent account or payable-through sanctions.